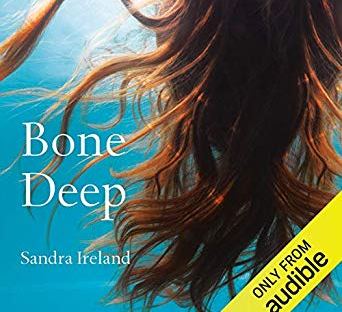 Boy, writing audiobooks reviews is hard! But I am really excited to discuss Bone Deep today. This novel made me realise how much I miss Scotland. Take me back!

What happens when you fall in love with the wrong person?

The consequences threaten to be far-reaching and potentially deadly.

Bone Deep is a contemporary novel of sibling rivalry, love, betrayal and murder. It is a dual narrative, told in alternative chapters by Mac, a woman bent on keeping the secrets of the past from her only son, and the enigmatic Lucie, whose own past is something of a closed book. Their story is underpinned by the creaking presence of an abandoned water mill and haunted by the local legend of two long-dead sisters, themselves rivals in love and ready to point an accusing finger from the pages of history.

The heart wants what it wants. This is the lesson I take with me after reading this novel.

Lucie is looking for a fresh start, or at least, a change of scenery. Thrown out of the family house, she finds shelter at Mac’s as an assistant. Not too far from her old life, but away enough for the pain to get duller.

Mac is a retired historian currently writing about Scottish folklore stories. She lives with her dogs and is close to her son Arthur.

What else can I say that would make you want to meet those women without revealing anything?

Well, I am at a loss for words. Why? Because one of the magical sides of Bone Deep is its excellent writing. The narration is crystal clear, each word soaks the page like a drop of Scottish rain. When I hear a book being categorized as ‘literary’ I usually cringe. I wonder if I’ll get all the metaphors, the hidden meanings behind each sentence, or the overall plot behind the fancy sentences. Yet, I can’t find another word to describe Bone Deep. This novel is the example of perfect literary fiction.

Jumping from Mac’s point of view to Lucie’s, the book flows slowly and smoothly. As the chapters go by, the relationship between Mac and Lucie evolves, built on secrets on each part. I loved getting to know them through the other’s eyes. Mac appears rough, happy in her loneliness. Lucie is lost, rude. As events unfold, the discovery that they both suffer from love is heartbreaking.

Mac has a story to tell, ‘The Cruel Sister,’ while Lucy is trying to change her own story. Their lives intertwine beautifully under the grey and raw Scottish sky.

You are not going to find happily-ever-afters here. Bone Deep is intricate, it stabs you in the back like a woman stealing her sister’s boyfriend, it hurts like the sting of betrayal that poisons a wife. With a poignant background of folklore enhancing the tragedy held between the pages, Bone Deep settled under my skin and made me crave for more. Always more.

Every mistake gives birth to a wound. Each wound leaves a scar. Mac and Lucie are mirrors reflecting their fears, errors, pain, and most of all, guilt. Those emotions swirl and don’t let up with the passage of time. They create a veil of tension that lead to a climax that is the only way out. A bright and burning exit allowing the secrets to fly high. Captivated by the storylines, I found myself becoming so close to Mac and Lucie that parting hurt. I felt utterly bereft, unwilling to leave the book.

The setting is another magical part of Bone Deep. Running in each character’s veins are the strength and rawness of the country.

Talking about Scotland, I must thank the narrators for their tremendous work. As soon as the voices reached my ears, I was in my dear Scotland. I chuckled at the slang, I shuddered when the tone got quieter, I was living in the cottage, I was going to Arthur’s shop, I could see the mill without even closing my eyes. Listening to Bone Deep adds power to the novel, and I can’t recommend enough that you treat yourself to both the audio and the written versions.

I can’t thank Kelly at Love Books Group enough for inviting me to be part of this blog tour and for providing me with the wonderful experience to listen to the novel. 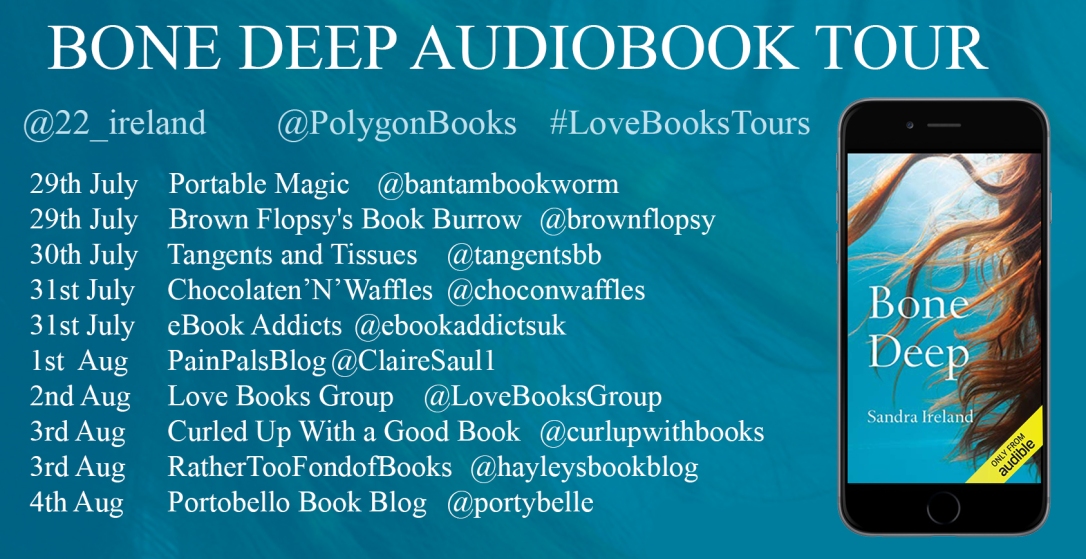 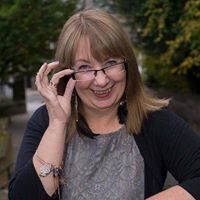 Sandra Ireland was born in England but lived for many years in Éire before returning ‘home’ to Scotland in the 1990s. She is the author of Beneath the Skin, a psychological thriller, which was shortlisted for a Saltire Literary Award in 2017. Her second novel, Bone Deep, a modern Gothic tale of sibling rivalry, inspired by an old Scottish folktale, will be published in the UK by Polygon in July, and in the US (Gallery) and Germany (Penguin) next year. She also writes poetry, often inspired by the seascapes of Scotland’s rugged east coast. Her poems have been widely published in anthologies, including Seagate III (Dundee), and New Writing Scotland. She won the Dorothy Dunbar Trophy for Poetry, awarded by the Scottish Association of Writers, in 2017 and 2018. Sandra is Secretary of Angus Writers’ Circle and one third of the Chasing Time Team, which runs writing retreats in a gloriously gothic rural setting.