I am not a Mondays fan. Are you? The answer doesn’t matter, I have the perfect way to kick off this week: a book. Different, unsettling, revealing its secrets drop by drop…

I would like to thank Hornet Books and Kelly @LoveBooksGroupTours for inviting me to be part of the blog tour. I received a copy of this novel in exchange for an honest review.

It’s the summer of 1972, and 30-something divorcee Martyn returns to London after some years away. He joins the Olive Grove, a religious community, where he forms a relationship with Amelia. Over time Martyn becomes suspicious of the Olive Grove’s leaders, a pair of apparently ordinary men who can speak in perfect unison, known as the Two.

A sequence of ambiguous events might indicate that the Two have malign purposes, though Martyn cannot be sure. These suspicions come to a head when Amelia breaks off with Martyn and appears to vanish. He travels to Devon, where the Olive Grove has a retreat house, in search of Amelia and the truth about the organisation. There, events take several disturbing and unexpected turns.

I had no idea what I was getting into when I began reading Undercliff. All I knew what that the title made me think of a remote, somehow eerie place. One look at the cover reinforced my feeling and I embraced the special experiment that is the read of Mark Brend’s novel.

A manuscript arrives. On it, a tale. Not any tale. The account of a man looking for answers. I strongly believe that us, individuals, search for a path to call ours and look for guidance in life’s events, in fate, in small moments. I met Martyn Hope and I was seduced. Not by the man himself, but by his analysis of his own life mixing subjective thoughts and external observations. It takes years to be able to look back on your life and dissect the events that had led you where you ended up. Most of us won’t even be able to do so. The author’s exquisite account of his main character’s life made me think it was possible. And that it was worth it.

When Martyn joins the Olive Grove, something in him is missing, and he is trying to fill the void. Aren’t we all? Boy, Undercliff had me pondering about our reason to exist, our beliefs, and the blurry line that our years weave until we reach our end! Do not fear, for the philosophical themes explored in the book never get so complicated that you lose the plot or feel you’re reading an essay on foggy religious theories! Mark Brend takes our hand and bring us to a place which at first seems to be the solution to Martyn’s loneliness and his doubts, before releasing his grip to let us walk into the mud and make our own opinion on what he offers.

If, at the beginning, being part of a community allows our main character to find peace, something in him stirs and decides not to settle. Is it a lack of belief? A weak faith? Or is it Martyn’s instinct warning him against immersing himself too deeply in a clan which soon looks a lot like a cult. But we are in the 1970s, there is no internet, there are no reports. Cults are difficult to break in and discover. People can only believe books, friends, what they hear or see.

I was mesmerised by Martyn’s story. In search of a better place for himself and his peace of mind, he tangles up in something bigger than him which makes him question his own thoughts and views on every aspect of his life. Can he blame this new form or religion for not finding his place among the Olive Grove people? Is it just a case of it not being what he was hoping for? What starts as a look at a possible identity crisis soon turns into something darker. Martyn sees things. Freeing himself from the power of The Two, the leader of the unorthodox group gathering people in a way regular religious communities have failed to do, Martyn slowly gets a better view of what is around him. This spurs him to examine closely who he is, and his journey into self-discovery is compelling.

While Martyn fights between what he think and what he feels, strange things begin to happen and when he gets separated from a woman he fell in love with during his time at the Olive Grove, the novel takes another turn. Despite its slow pace, Undercliff owns a steady and strong plot! With Amelia’s disappearance, the remains of the veil Martyn was living under disappears, but is he ready to fully open his eyes? Seeking for the truth and accepting it are two very different things. With only himself to rely on, Martyn decides to unravel what the Olive Grove is hiding. If the trigger is his friend’s disappearance, it is pure truth that keeps him going, and soon a bigger picture appears. A giant picture… Except it is made of bits and bouts, events which would never raise suspicions when looked at separately. With no solid ground under his feet, Martyn must fight for his life…

I am not a huge cults fan but Mark Brend kept me engrossed through the entire novel with a fantastic combination of mystery, real characters, and the exploration of one’s weaknesses and strengths. Undercliff is a riveting take on cults and power with a unique touch of blurriness which adds a marvelous disturbing edge to a quest for truth.

The book is available now! Amazon

I can’t wait to read what other bloggers thought of Undercliff! Don’t forget to check the rest of the tour! 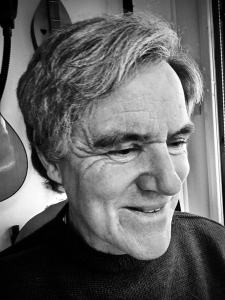 Mark Brend is a writer and a musician based in Devon. He has written several books about music and has released six albums under various artist names. Undercliff is Mark’s first novel.