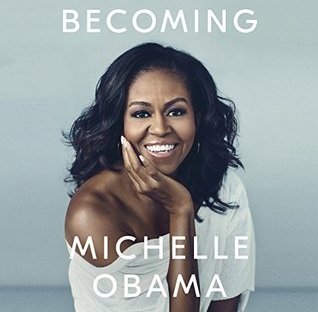 I am not used to audiobooks! Writing reviews feels so much complicated when you’ve listened to a story! So bear with me while I tell you about my meeting with Michelle Obama…

An intimate, powerful, and inspiring memoir by the former first lady of the United States

In a life filled with meaning and accomplishment, Michelle Obama has emerged as one of the most iconic and compelling women of our era. As first lady of the United States of America – the first African American to serve in that role – she helped create the most welcoming and inclusive White House in history while also establishing herself as a powerful advocate for women and girls in the United States and around the world, dramatically changing the ways that families pursue healthier and more active lives and standing with her husband as he led America through some of its most harrowing moments. Along the way, she showed us a few dance moves, crushed Carpool Karaoke, and raised two down-to-earth daughters under an unforgiving media glare.

In her memoir, a work of deep reflection and mesmerizing storytelling, Michelle Obama invites listeners into her world, chronicling the experiences that have shaped her – from her childhood on the South Side of Chicago to her years as an executive balancing the demands of motherhood and work to her time spent at the world’s most famous address. With unerring honesty and lively wit, she describes her triumphs and her disappointments, both public and private, telling her full story as she has lived it – in her own words and on her own terms. Warm, wise, and revelatory, Becoming is the deeply personal reckoning of a woman of soul and substance who has steadily defied expectations – and whose story inspires us to do the same.

Well, as soon as someone appears in the light of fame, we assume we know them. But isn’t what we see only one side of someone? A perfectly staged appearance? We are keen to judge based on images, on the perception we get of a sentence, a smile, an impression. I’m as guilty as you are.

This is why I picked Becoming by Michelle Obama. I could not resist the idea of having this former first lady talk to me. I remember vividly the night her husband was elected. I recall the wind of change. I still feel the hope that shook the world, not once, but twice. Whether you are a Democrat, a Republican, or allergic to politics, you can’t have missed the 45e President of the United States.

But I’m not here to talk about politics. At least not in its purest form. I want to talk about the effects of politics on a woman, on a relationship, on a family. I want you to disregard all judgements you have about your country’s system, or the United States’ political system. Becoming allowed me to take a step back from news headlines, heavy events, crises, all those things that make politics such a tricky subject. Michelle Obama gave politics a human face during her time at the White House, and now she’s giving it a human voice with her book. Far from conspiracies, nuclear talks and whatever, her autobiography is a door to the behind-the-scenes, to life around Politics with a big P.

Before I started listening to Becoming, Michelle Obama seemed a million years away from me. An icon made of steel, of stronger metal than the rest of us. With humility, humor, and honesty, Michelle Obama reminds us she was born the way we were, she attended school, she took the bus, she learned from her parents, she got stage fright, she fell in love, she made choices, she got lost in the way… I can’t begin to imagine how surprised I was to think “Hey, I felt the same way!” or “Hey, that happened to me, too!” Well, I didn’t finish Law school or met a cute Barack, but her life, especially her early years, felt so close to what the rest of us deal with that I felt even more admiration for her.

I laughed when I learned Barack Obama had been late on his first day. Hearing about her father made me extremely sad. Learning about her struggles as a kid made me think of my own time at school. I felt as if an old family friend was talking to me, telling me it is okay to change, to evolve, to find your way.

Of course, you can’t escape politics, but the book only dances around it. There is no debate on laws, only a sincere account of what it means to stand on the side of such power and responsibilities. I was in awe of how simply Michelle Obama would admit to not liking politics, how she struggled with her husband about the course of their lives changing because of them, how the woman and professional Michelle turned into a full-time Mrs Obama with a crazy schedule but never losing sight of what’s important.

Whether you agree with what she did as a First Lady or not is not the point. Becoming is about letting others know we grow through life, we learn, we fight, we lose, and we love. There is so much to this autobiography I’d love to share but I’d rather you ‘met’ the real Michelle by yourself.

We all are a work-in-progress, and I was reminded to keep looking ahead with hope for the future without never turning my back on my past. Becoming is a stunning and inspirational piece.