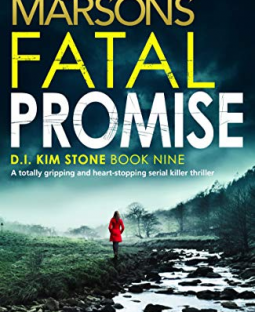 Massive book hangover alert. I am in love with Angela Marsons. My heart might not recover and I couldn’t help but share some thoughts on Twitter as I was reading. I am not over this book, and I don’t want to!

A massive thank you to Bookouture for providing me with an e-copy of this brilliant novel and my biggest thanks to Angela Marsons for feeding my crime fiction love. This review is unbiased but filled with fangirlism because #TeamKimStone!

Eeeny meeny, miney, moe. Who lives, who dies only I know.

When the body of a doctor is discovered brutally murdered in local woodland, Detective Kim Stone is shocked to discover the victim is Gordon Cordell – a man linked to a previous case she worked on involving the death of a young school girl. Gordon has a chequered past, but who would want him dead?

As the investigation gets underway, Gordon’s son is involved in a horrific car crash which leaves him fighting for his life. Kim’s sure this was no accident.

Then the body of a woman is found dead in suspicious circumstances and Kim makes a disturbing link between the victims and Russells Hall Hospital. The same hospital where Gordon worked.

With Kim and her team still grieving the loss of one of their own, they’re at their weakest and facing one of the most dangerous serial killers they’ve ever encountered. Everything is on the line. Can Kim keep her squad together and find the killer before he claims his next victim?

The killer is picking off his victims at a terrifying pace, and he’s not finished yet.

I am not a fan of rereading. But we all make exceptions, don’t we? And the Kim Stone series is perfect for that. There is so much in each novel written by the gorgeously talented Angela Marsons that no matter how many times you pick her books, it never gets old. Each word is alive. So, I went back to book eight, knowing what I would find, happily drowning myself in the plot, hugging each character as if they were old friends I hadn’t seen in a while. Because that’s exactly how it felt…

After this, I took a deep breath and opened book nine.

Now I must keep this review short and focus mainly on all my feelings rather than the intrigue as Fatal Promise is part of the series and I would hate myself forever for spoiling you.

Ninth book, can you believe this??? I haven’t read them all yet. I keep them for days when I know I need the best. Angela Marsons never lets me down.

Fatal Promise is not a title, it’s a euphemism! The promise of a stunning, addictive novel tainted with blood and fate. Following the events of the previous novel, we are thrown in a familiar place with a missing piece of the puzzle. Kim Stone, not as hard as her name would have you believe, is recovering from recent events, and so is her team. How do police officers deal with death on a daily basis will always be a mystery to me. It takes strength but also humanity to keep going despite witnessing the worst in humanity and in life. Sometimes I have always hated in TV shows, who can be compared to book series, is the easy way the protagonists overcome whatever happens to them or those around them, and how little is done to actually delve into the process of moving on. I must thank Angela Marsons for breaking my heart, but also for knowing how to mend it. Chapter after chapter, like time on a scar, she put words and feelings on loss, anger, denial, change. All those things the human condition fights against but will always lose to. In Fatal Promise, the author paints the most personal and human side of her characters, making her readers feel even closer to a team we see grow, play, work, and eat.

Authenticity oozes off every page. Fatal Promise is raw, character-driven, amazingly fueled by what makes Kim, Stace, Bryant and co who they are, digging deep to let the blood flow, the tears come, the life take control again. If you thought you couldn’t be surprised by this brilliant team, this book will prove you wrong. I admit there was a bit of trepidation before starting novel number 9, but I shouldn’t have worried. Nothing feels old and rehashed. You just come home to a world you’ve learned to love thanks to a spectacular narrative style and a chillingly but fantastic understanding of human beings and all their complexities.

But do not be alarmed, maudlin is not a work you can use for Fatal Promise. Do you love your plot intricate and masterfully weaved? You win the lottery with this one! Two cases for one, intertwined with personal demons to fight, this can only bring adrenaline, tension, and ‘OMG what the hell am I thinking / feeling / witnessing????’ moments. Unputdownable doesn’t even cover it. A doctor dies, bouh! But with Angela Marsons, there are no coincidences and a link to a previous case is your first step into the investigation. Gripped from the opening, I jumped from one dead body to the other like a cat on mice to find the dots connecting the victims. Short chapters from the culprit kept my blood run cold and despite being a seasoned reader, I couldn’t figure out what was happening! Tainted by blood, old and new, this case is hard on the reader as it is on the team, and this is one of its biggest strengths. Angela Marsons has created a world you can walk into with no effort, like a mirror to our world, and all you have to do is let your mind and heart walk in rhythm with the flow. The combination of a real police procedural and haunted, flawed, striking characters makes Fatal Promise an outstanding crime novel and a strong new installment in one of my favorite series. 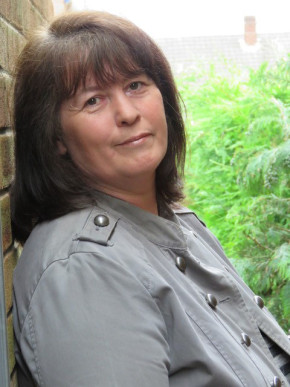 Angela Marsons is the author of the International Bestselling DI Kim Stone series and her books have sold more than 3 million copies in 2 years.
She lives in the Black Country with her partner, their cheeky Golden Retriever and a swearing parrot.

She first discovered her love of writing at Junior School when actual lessons came second to watching other people and quietly making up her own stories about them. Her report card invariably read “Angela would do well if she minded her own business as well as she minds other people’s”.

After years of writing relationship based stories (The Forgotten Woman and Dear Mother) Angela turned to Crime, fictionally speaking of course, and developed a character that refused to go away.
She is signed to Bookouture.com for a total of 16 books in the Kim Stone series and her books have been translated into more than 27 languages. Her last three books – Blood Lines, Dead Souls and Broken Bones – reached the #1 spot on Amazon on pre-orders alone.