Happy Thursday!
Today, we get something different. Something fun, something out of my comfort zone, something you might enjoy!

Today I’m proud to share an extract with you!

I would like to thank the publisher and Midas for inviting me to share a bit of this book with you! Let’s jump through time! 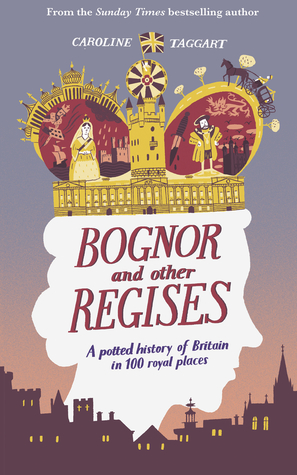 Written in an amusing, accessible style, Bognor and Other Regises puts the spotlight on some of Britain’s quirkiest royals and uncovers fascinating facts and anecdotes about them all. Right through from Ethelred the Unready to Elizabeth II, from the Isle of Skye to Glastonbury Abby, Caroline taps into the nation’s fascination with royalty past and present.

Whether glamorous or sordid, merrie or morose, our monarchs and their families have led lives very different from ours – and all too often they’ve held the Fate of the Nation in the palms of their hands. They’ve married for diplomatic reasons and created diplomatic incidents when they divorced. They’ve borne a dozen children and still left no one to succeed them. They’ve got themselves excommunicated and created their own religions. They’ve waged war against their neighbours and their cousins; built frivolous summer palaces and formidable fortresses. In so doing, they’ve left their mark all over Great Britain, in castles and churches, on battlefields and stained-glass windows. Their stories are written all across our landscape, if we know where to look for them.

Discover the chocolate kitchens at Hampton court built to serve Williams III and Mary II’s levees; why the anniversary of the death of Katherine of Aragon is celebrated in Peterborough every January and the 20 varieties of thyme that Prince Charles grows at Highgrove. In this amusing and fast-paced tour of Britain, Caroline Taggart is our guide to all the weird and wonderful places connected with royalty over the last 1,500 years.

What a parcel of fools and dastards have I nourished in my house, that not one of them will avenge me of this one upstart clerk!

Henry II, according to the Dictionary of National Biography

These famously exasperated words are more often rendered as something along the lines of ‘Who will rid me of this turbulent priest?’, but the impact is the same: Henry had appointed his old friend Thomas Becket as Archbishop of Canterbury. Thomas had previously been his Chancellor, helping Henry to introduce reforms that gave him direct control over much of his kingdom (and thus alienated the hereditary nobility whom he was bypassing), levied heavy taxes (alienating those who had to pay them) and reducing the power of the Church and its attachment to Rome (alienating the clergy). Pretty comprehensive as alienation goes.

Henry had thought that having his friend as head of the Church in England would bring at least that part of his realm back on side; Thomas had done his best to refuse the job, saying that as Archbishop he would have to serve God and the Pope in preference to his King; the King had insisted, the inevitable falling out had occurred and when various of his bishops had come to report on Thomas’s latest piece of insubordination, Henry had uttered the fatal cry. Four knights, taking him at his word, rushed to Canterbury and murdered Thomas in the cathedral on 29 December 1170.

What had happened was this. Henry, determined that there should be no argument over the succession when he died, had had his eldest surviving son, known as Henry the Young King, crowned earlier in the year. Permission for the ceremony, and the right to perform it, theoretically lay with the Archbishop of Canterbury, but Thomas was in exile in Europe and being difficult. So the older Henry called in the Archbishop of York. Both Thomas and the Pope were outraged. Thomas, home again, excommunicated the clergymen involved – and thus signed his own death warrant.

Henry, to give him his due, was horrified and did public penance for the sin for which he had inadvertently been responsible. Jean Anouilh’s play Becket shows the King stripped and kneeling at Thomas’s tomb, waiting for the monks to scourge him. And Thomas very quickly became a martyr and a saint – he was canonised in February 1173, little more than two years after his death (something of a record). Canterbury also became a place of pilgrimage – the pilgrims in Chaucer’s The Canterbury Tales, written some two hundred years later, are heading to Thomas’s grave.

Canterbury still attracts pilgrims, religious and secular alike. A plaque on the floor of the northwest transept, in a section of the church known as the Martyrdom, marks the spot where Thomas died, and a single candle burns in the Trinity Chapel, where his tomb used to be. It was destroyed and looted on the orders of Henry VIII, who maintained that Thomas ‘had been a traitor to his king, and defied his honour’ – a subject on which Henry VIII felt strongly. He probably also felt strongly about the 26 wagonloads of gold, jewels and other treasures he is alleged to have taken from the cathedral, including a large ruby that is now part of the Crown Jewels in the Tower of London.

Despite all that, Canterbury remains arguably the most magnificent and the most moving of all England’s cathedrals. It’s been here, in one form or another, since 597, when St Augustine first arrived on these shores with a mission to convert the local heathens to Christianity and is the symbolic centre of the Anglican community throughout the world. Its 14th-century Gothic nave and its huge and remarkably well-preserved crypt are simply incomparable. As is its intricately carved Great Cloister – once you’ve admired everything at eye level, it’s worth risking a serious crick in the neck to take in the faces, animals and heraldic shields above your head. And, back inside, it’s difficult not to shiver – just a very little – as you stand on the site of Thomas’s murder.

Ironically, crowning the young Henry did his father much more harm than good. He divided up his kingdom, giving Henry his own patrimony – England, Normandy, Anjou and Maine. His next son, Richard, became Duke of Aquitaine, Geoffrey had Brittany and John had to wait until his father’s invasion of Ireland made a new territory available. Needless to say, this pleased none of them, particularly as Henry, despite being nominally ‘junior king’ of a vast kingdom, was given little money and less power. The rest of Henry II’s life was spent in dealing with rebellions from his sons and his wife (see page 00), and the ultimate blow came when young Henry contracted dysentery and died in 1183, aged only 28. He had been waging a campaign against his father at the time.

What do you think? I am not fond of historical stuff (probably because we are forced-fed in school until we can’t take it any more) but there’s something very cool about knowing more about the Royals and the little stories behind the big boring History books! I cannot wait to read this, and you’ll get my review soon!

Caroline Taggart worked in publishing for 30 years before writing I Used to Know That, a Sunday Times best-seller. Caroline is also author of the bestselling Her Ladyship’s Guide to the Queen’s English and Around Britain by Cake for AA Publishing. She has appeared frequently on BBC Breakfast and on national and regional radio, talking about language, grammar and Pythagoras’s theorem. Her record is 16 radio interviews in one day on the subject of exclamation marks. She lives in London.

5 thoughts on “Open Your History Book to Page 171, No, Just Kidding: Bognor and other Regises by Caroline Taggart @CiTaggart #Extract @midaspr”