I am publishing this from the 24/7 McDonalds near my new house as my Internet provider has cut my connection two days earlier than planned!

This review is my unbiased opinion and thank you to St Martin’s Press for inviting me to be part of this blog tour and providing me with a copy of the book. 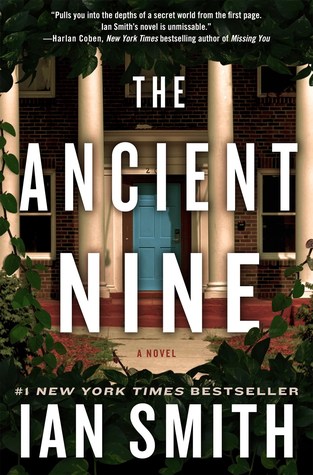 Spenser Collins
An unlikely Harvard prospect, smart and athletic, strapped for cash, determined to succeed. Calls his mother—who raised him on her own in Chicago—every week.

Dalton Winthrop
A white-shoe legacy at Harvard, he’s just the most recent in a string of moneyed, privileged Winthrop men in Cambridge. He’s got the ease—and the deep knowledge—that come from belonging.

These two find enough common ground to become friends, cementing their bond when Spenser is “punched” to join the Delphic Club, one of the most exclusive of Harvard’s famous all-male final clubs. Founded in the nineteenth century, the Delphic has had titans of industry, Hollywood legends, heads of state, and power brokers among its members.

Dalton Winthrop knows firsthand that the Delphic doesn’t offer memberships to just anyone. His great-uncle is one of their oldest living members, and Dalton grew up on stories of the club’s rituals. But why is his uncle so cryptic about the Ancient Nine, a shadowy group of alums whose identities are unknown and whose power is absolute? They protect the Delphic’s darkest and oldest secrets—including what happened to a student who sneaked into the club’s stately brick mansion in 1927 and was never seen again.

Dalton steers Spenser into deeper and deeper recesses of the club, and beyond, to try to make sense of what they think they may be seeing. But with each scrap of information they get from an octogenarian Crimson graduate, a crumbling newspaper in the library’s archives, or one of Harvard’s most famous and heavily guarded historical books, a fresh complication trips them up. The more the friends investigate, the more questions they unearth, tangling the story of the club, the disappearance, and the Ancient Nine, until they realize their own lives are in danger.

Ivy leagues. I have always been intrigued by those Academies of Excellence, and everything they include. Just looking at the premises of Yale, Stanford, or Harvard leaves me speechless and I can’t help my imagination go wild about what it might be like to be part of the Chosen Ones.

The Ancient Nine appealed to me right away. Fresh out of university, I should have wanted nothing but to stay away from classes and tall buildings filled with silly boys and cliques of young girls. Yet, the synopsis hinted at secrets and a free tour of one of America’s most famous university. I just couldn’t resist. I keep saying I am not one for history … The author made me change my mind!

The prologue, set in 1927, was enough for me to cling to the book. Guys at university are stupid, but when things take a bad turn and you are left with questions, you can forgive them! I was keen to follow the steps that led to back to Harvard and find out what was hidden behind this somehow cryptic and chilling opening.

1988: Spencer Collins, far from the usual wealthy guys striding the halls of the university, gets an invitation from an elite club. I had always assumed such clubs existed, but my knowledge of Ivy Leagues only depends on Suits characters saying they only hire from Harvard and Gilmore Girl’s Rory’s experience at Yale. I was coming a long way!

With a clever narrative filled with youth and its enthusiasm, Ian Smith handed me an invitation into a world I could only dream of. Better than this, he highlighted the good, the bad, and the terrible. Everything is scrutinized, from Spencer’s poor background and skin color to the power held by the famous heads drinking their weight in Vodka. The Ancient Nine isn’t a coming-of-age story. Yes, you get guys having fun and it seems so genuine you just happily tag along from your couch, happy you’re not living this kind of life. Yes, there is a bit of romance. You know I am not the biggest fan, but once again, the balance was perfect and just enough to let the reader picture life in the late 80s, movies and pop-corn included. I loved it!

In the middle of his busy life, Spencer and his rich-but-no-jerk best friend Dalton kick off a race against time, past and future, to better understand the Delphic Club trying to punch Spencer, and they dig more than inappropriate pictures of CEO or politicians. Suddenly, the cool idea of clubs turns dark and you are immersed in the history of Harvard. I never thought I would be engrossed in the plot the way I became. While drooling over Harvard’s libraries, I was falling into the pages of the old days, and the very old ones, learning about Kings and rituals, rumors and facts intertwined. Spencer and Dalton’s research to better understand why the Delphic is interested in a student like Spencer led to the darkest corridors of the school itself, raising questions every time the boys seemed to get closer to an answer about the clubs and their origins. More than a gym pass, they pledge to open doors you never knew existed, emphasizing the idea of brotherhood to the extreme. But Dalton knows more than what the shiny faces let on, and reveals the existence of The Ancient Nine, a group supposed to protect the club’s darkest secrets. Fed by stories from his uncle, one of the oldest members of the Delphic, Dalton holds many keys that will guide him and Spencer into the heart of Harvard.

I can’t explain how it happened, but Ian Smith worked his magic and I was captivated by the plot from the first page to the final one. Fresh blood, old stories, hours In libraries and clues to make your head explode, The Ancient Nine is an exciting trip to the past.

Ian K. Smith is the author of nine New York Times bestselling nonfiction books, several of them, including Shred and Super Shred, #1 bestsellers, as well as one previous work of fiction, The Blackbird Papers. He is a graduate of Harvard, Columbia, and the University of Chicago’s Pritzker School of Medicine.