When you read a book as soon as you get it and then you have to wait FOREVER to talk about it… The day is finally here!

Thank you to Penguin Books UK and the lovely Hannah for inviting me to be part of this blog tour. This is my unbiased review. 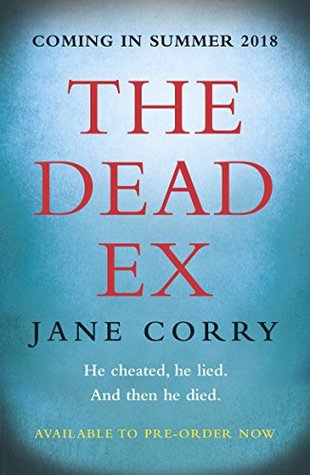 ‘I wish he’d just DIE.’
He said in sickness and in health. But after Vicki was attacked at work and left suffering with epilepsy, her husband Daniel left her for his mistress.

So when Vicki gets a call one day to say that he’s gone missing, her first thought is ‘good riddance’. But then the police find evidence suggesting that Daniel is dead. And they think Vicki had something to do with it.

What really happened on the night of Daniel’s disappearance?
And how can Vicki prove her innocence, when she’s not even sure of it herself?

How do I know I have had a brilliant reading time? Because when I close the book, I don’t remember where I am. That’s exactly what happened with The Dead Ex! I JUST couldn’t put the book down. (Now, you know that I liked it, but please keep on reading, haha!)

One sitting is all it took for me to immerse myself in this story, swept away by a writing that whispered to my heart. Reading a book by Jane Corry is like opening a door, you don’t know what’s behind, but you go in, hand in hand with the words on the page. Her prose just spoke to me as a friend, there is a feminine touch to it, and I mean it a good way. It doesn’t mean the story was maudlin, soppy and all romantic, those tend to give me spots and rashes! I found a true and genuine story in The Dead Ex, with struggling women, dark pictures, ominous thoughts, scary parts, but I always felt in good hands.

I read. I devoured. I adored.

My book hangover was a few months ago but it left a strong memory in my bookworm heart. Even now, as I am writing this, (in May) I don’t know if I can make the book justice. The Dead Ex is a brilliantly compelling and bittersweet tale of a common rock making the biggest waves. David, who gets the role of the ex-husband (remember I don’t like husbands and tend to suspect them!!!) was a shadow I felt lurking around, not knowing what to make of him. But in the end, he is the one who triggers so many things and pushes every woman in the book to act the way they do.

Jane Corry managed to give an amazing example of the perfect characterization of women’s strengths and weaknesses. We can’t deny our heart makes decisions and we listen to it when we shouldn’t. Well, this story tells you what could happen if you do! I have decided not to reveal anything about The Women breathing and living between the pages of The Dead Ex because, like scents, they will trigger emotions in you that will come from your experience and I wouldn’t want to intervene.

I was totally engrossed in the different narrations and the second part had me wondering who I was reading about. I was drawn to Vicki, not because of her epilepsy, but the woman herself. She’s been through so much, but she keeps going. Yes, struggling, but going! Scarlet broke my heart, the daughter/mother story echoing Vicki’s loneliness. It was beautiful, heart-wrenching, and felt so true. The bond between a mother and a daughter is so strong that it leaves you blind and when the curtain is pulled, it hurts. But parents are human beings with their flaws... I just loved the characterization so much!

The Dead Ex is well-crafted plot immersed in a heart-breaking reality.

You can get the book on Amazon!

And you get the chance to read more about the story in the other blog tours!

17 thoughts on “Till Death Do Us Part… And After: The Dead Ex by @JaneCorryAuthor @HannahLudbrook @PenguinUKBooks”