Good morning, afternoon, evening! Happy new week! We are starting the day (at least, I am!) with an extract of Scoop of the Year by Tom Claver! I haven’t had the chance to read it yet, but I really want to! 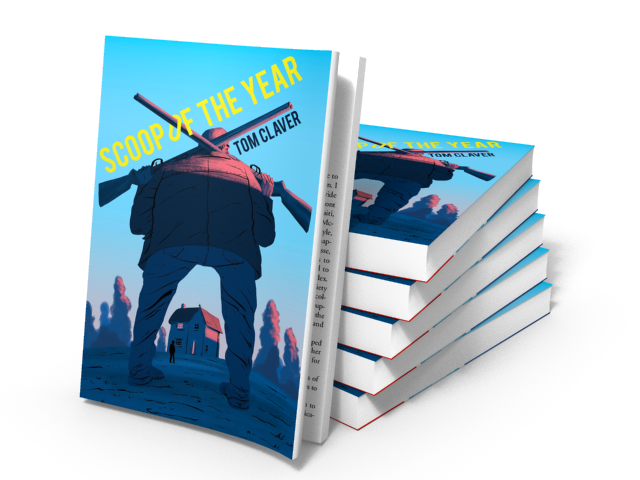 Martin, a hapless journalist on a weekly financial magazine, sees his life take a nosedive with the arrival of Tom de Lacy, a well-heeled reporter who grabs the limelight, not to mention the well-paid industrial correspondent’s job that he has his eye on.

He does his level best to sabotage Tom’s career, only to see his rival land a plum job in television.

But watching his rival’s success while his life disintegrates makes Martin a desperate fellow. Falling on hard times can be murder, and in certain circumstances could even give rise to it.

So when Martin gets a scoop on a major corporate scandal, he just has to grab the opportunity with both hands. He sees it as not only his turn to shine, but his duty.

When we got back to London, Dan dropped off the camera at the studio and downloaded the interviews for post-production while I crashed out on Caroline’s sofa. I slept until she returned home around eight in the evening, and pretended to be dozing while she tiptoed around the flat in darkness. At first I thought she hadn’t turned on the lights because she didn’t want to wake me.

With a half-open eye, I watched her go over to the window, and take cover behind one of the curtains. She appeared to be peeking down at the street below.

‘What the hell are you doing?’ I asked, my head still flat on the sofa and my voice sounding gravelly.

Caroline screamed loudly. I turned on a side light next to the sofa.

‘Turn it off!’ she shouted.

I did so and watched her tiptoe towards me as I straightened up on the sofa to make room for her to sit next to me.

‘Did you tell Jebb where I lived?’ she asked.

I gave her one of my confused looks and did not reply.

‘And my mobile number?’

I rubbed both eyes and yawned wide.

‘Stop it, Martin. This is serious. He left nine messages on my mobile, and when I didn’t answer them, I found him prowling around the dustbins in the front garden. What does he want?’

This I could answer honestly, so I did. ‘You.’

‘I may have told him you needed cheering up because you had a bit of bad luck recently. You know, the divorce, and things.’

‘Why would you say that to him of all people?’

I could also answer that honestly. ‘Sis, we need him to scare off Uncle Walt.’

‘He only wants to take you out to a nice Indian restaurant he knows in the Mile End. What harm is there in that?’

My sister went for my head. Two fists pummelling me in all sorts of directions. Pretty hard, too. I grabbed her wrists, and held them until she stopped panting.

‘Look, if he’s frightening you when he’s only asking you out, imagine how good he’ll be at scaring Uncle Walt when he puts his mind to it. You have to admit he’s pretty damn good at this.’

‘What happens to me when he realises I don’t want him?’

She had a point, and to be frank it was something I hadn’t considered. ‘We’ll cross that bridge when we come to it,’ I said.

‘No chance. I don’t think Jebb, and I may be guessing here, takes rejection easily. So you’ll have to go down there now, and tell him to go away and to never return.’

‘Of course now. He’s right outside. And when he’s gone, I want you gone too. I don’t want anything more to do with you, and your stupid plan to frighten Uncle Walt out of the house. I don’t know why I ever listened to you. Now go down there, and sort out the mess you’ve got us into.’

She pulled me off the sofa, and pushed me towards the door. It was useless to resist, so I slipped on my shoes and went downstairs to search for Jebb.

I found him in the back garden under a full moon, sitting on a stone wall and looking up at Caroline’s bedroom window. He didn’t say anything when I turned up, and I sat down next to him. We didn’t speak for a couple of minutes, and then I said, ‘She’s not in.’

‘Why didn’t you talk to her in the street?’

He sank his bald head into his heavy shoulders, and said, ‘I just couldn’t. She didn’t return my calls, and I thought she doesn’t want to know me. If I caught up with her in the street, then I’d know for certain she doesn’t want me, just by looking at her face.’

‘Why are you here then?’

‘You’re going to stay on guard all night?’

‘There’s no need, now that I know you’re here.’

‘Look, she likes you, but it’s all too early for her after the divorce.’

‘Did she say that?’ asked Jebb, lifting up his head.

‘That she likes me?’

His moon face had hope, and I couldn’t take that away from him so I nodded.

Jebb sprang to his feet, all twenty-one stones of him, and if this was a Broadway show, he would have started singing and dancing under her window.

‘You told me there’s still a chance, and in life that’s what we live for. Isn’t it?’

I suppose he was right. After all, I was looking for a chance to become a TV presenter so that I could eclipse Tom’s meteoric rise to fame. It was the only thing that was keeping me going, really. So I nodded to Jebb.

‘Give me all the details of this bloke in Dorset you want sorting. I can make arrangements this weekend.’

So I told him his name was Walter, and gave him the address of Greenfields.

‘Don’t worry, son, you’ll soon get back in there.’

‘These things take a bit of time, don’t they?’ I said. ‘Can’t imagine him disappearing overnight after one visit from you.’

Jebb looked at me curiously as if I had a screw loose or something. And then he replied, ‘It’s pretty much how it works, son.’

‘This will definitely be on the house,’ he said with a wink. ‘Give my regards to Caroline.’

And he disappeared through the side entrance of the house without another word being spoken.

That was a turn-up for the books. Who could have thought I would rescue victory from the jaws of defeat just with a few well-chosen words. Of course when I returned upstairs to Caroline, I thought it best not to give her an accurate rundown on what had transpired in the back garden.

‘Did you speak to him?’ she asked.

‘He apologised. He didn’t mean to frighten you at all. In fact, he was quite sweet.’

‘Yes, as a matter of fact. He knew I was away and he only wanted to make sure that you were safe.’

‘Never,’ she said, with surprise in her voice.

‘You mean like Shrek looking out for Princess Fiona.’

‘Or Quasimodo and Esmeralda,’ I said, offering a more literary and possibly more accurate comparison.

‘Now I feel bad about what I was saying about him.’

‘It’s too late now. He wished you a happy life and left.’

‘That was sweet of him,’ she said. And then she caught me completely off guard. ‘Martin, I need that money I gave you.’

‘To hire someone to frighten Uncle Walt.’

‘No can do, ’ I said, thinking how useful it would be for me to hang on to her two thousand while I was still sorting myself out.

‘Because if you are so determined for us not to hire Jebb, we still need the money for paying someone else.’

‘Our problem won’t go away.’

‘Can’t we just call it off, Martin? The roof needs fixing, and I’ve been asked by the other tenants to contribute towards it.’

‘For God’s sake, Caroline, where are your priorities?’

‘We need to keep the place dry.’

‘You won’t be moaning about leaky roofs once Uncle Walt is out of our hair.’

So, what do you think? I am intrigued! I will make sure to read it some time this year!

You can learn more about the book with the tour! 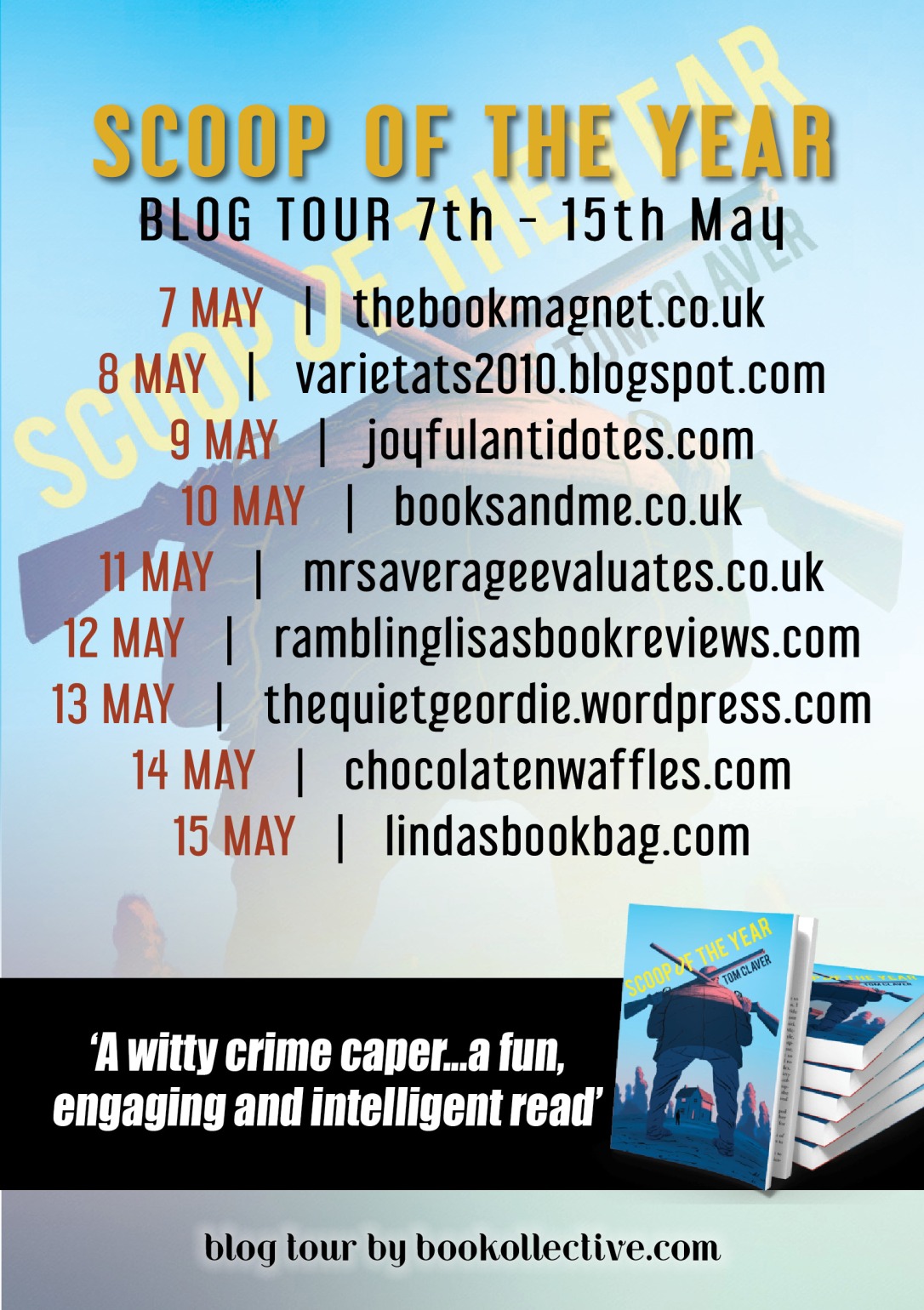 2 thoughts on “Scoop of the Year by Tom Claver: The Extract @Bookollective @Tom_Claver”