You can’t see it but as I am typing this, I am doing a happy dance. It has been a little while since my last Orenda read and oh my, had I missed it! (Yes, February 22nd was a long time ago!)

As usual, thank you to the delight that is Anne Cater for including me into the blog tour team, and to Karen Sullivan for being her awesome self. This review is unbiased and my sole opinion.

A French version of this review will be available soon! Details might differ as I experience stories differently depending on the language!

Title: We Were the Salt of the Sea
Author: Roxanne Bouchard
Translator: David Warriner
Publisher: Orenda Books
Date of publication: March 2018
Format: Uncorrected proof
Source: Publisher
Number of pages: 276
Rating: ⭐⭐⭐⭐ and a half!

As Montrealer Catherine Day sets foot in a remote fishing village and starts asking around about her birth mother, the body of a woman dredges up in a fisherman’s nets. Not just any woman, though: Marie Garant, an elusive, nomadic sailor and unbridled beauty who once tied many a man’s heart in knots. Detective Sergeant Joaquin Morales, newly drafted to the area from the suburbs of Montreal, barely has time to unpack his suitcase before he’s thrown into the deep end of the investigation. On Quebec’s outlying Gaspé Peninsula, the truth can be slippery, especially down on the fishermen’s wharves. Interviews drift into idle chit-chat, evidence floats off with the tide and the truth lingers in murky waters. It’s enough to make DS Morales reach straight for a large whisky… Both a dark and consuming crime thriller and a lyrical, poetic ode to the sea, We Were the Salt of the Sea is a stunning, page-turning novel, from one of the most exciting new names in crime fiction.

If the crime thriller genre was a song, it would be We Were the Salt of the Sea.

Catherine Day, alone in the world, a free atom looking for the meaning of her life, her past, her present, and her future. Catherine or the siren whose voice raises the dead. And by this I don’t just mean corpses!

Her trip takes her to a holiday postcard with sand all over it. Enigmatic sand with a quiet life, secrets drowned into the sea or the alcohol. A beautiful, mesmerizing setting filled with the kind of characters which could make you hate or love a place. On the surface, lessons are to be taught and listened to, but when you scrap, you discover the place and its people are just like everyone else. Human beings with feelings – love, hate, regrets, good intentions. It all comes and goes in waves.

“The sea is like a woman. When you choose to love her, you know you’re giving her your body and soul.”

We Were the Salt of the Sea is no ordinary crime thriller. I would not even put the book into this category! It is its own genre. It tells a story you think you might have heard before but the words are different, the gentle music of the sea greets you in this village of Gaspé, where nothing happens. Why should anything happen? Fishermen fish, fish get caught, the sun warms the skin. Like Catherine, I wonder a lot about life, and was able to relate to her musing and doubts. With nothing to hope for, to hold on to, to look forward to, what do you do? What is life if not a very long airport waiting area? Is love something your genes recognize? Is it natural or do you have to learn about it? What keeps anyone going? Away from the hustle and bustle of the big city life, this story reminds us of our roots.

Catherine’s arrival and the village’s reaction was quiet and beautiful, strange and scary, reassuring and hopeful. I could have stayed longer, looking at the sea, meeting those people, learning that there is another way to see and feel time passing. But the peaceful trip doesn’t last too long. The next track on the playlist is Bloody Red.

When a body is discovered, the tide comes in, and with it a policeman. Try and make your way in a tiny village full of massive fishermen who keep their mouth shut and their beer cold! Poor Joachim Moralès had way too much on his plate even before his arrival! Another stranger, but his was not very welcome, to say the least! In his fifties, away from his wife and kids, far from Montréal, it seemed the world was against him. I believe it is still the case! The parallel between him and young Catherine, their different motives around the same person: Marie Garant, gave the story a slow dancing tune. A forbidden and magnificent dance for more than what life offers them.

My heart reached out to Cyrille and Jérémy, my fists clenched when some characters got in the way, I was both intrigued and irked at the Guess Who game and the tiny-tiiiiny hints we were given, I wanted to shake people until they spat out the truth, just like when you know someone is holding something up that would change everything. Whenever I felt I was on the right track, I was thrown into another quicksand and had to fight to get back on my feet while the water was threatening to swallow the truth, and the inhabitants of the village were the perfect witness and actors of the hide and seek game to the rhythm of the waves.

“Do we ever really know our own mothers, detective? Our parents, our children… our wife? Do we even know ourselves?”

Overall, We Were the Salt of the Sea is a superb crime piece hidden in a story about the meaning of life and love. A page-turner which leaves salt on your fingers and sand between your toes.

You can get the book on the Orenda e-book store or on Amazon!

You can find out more about this fabulous tale in every other stop! 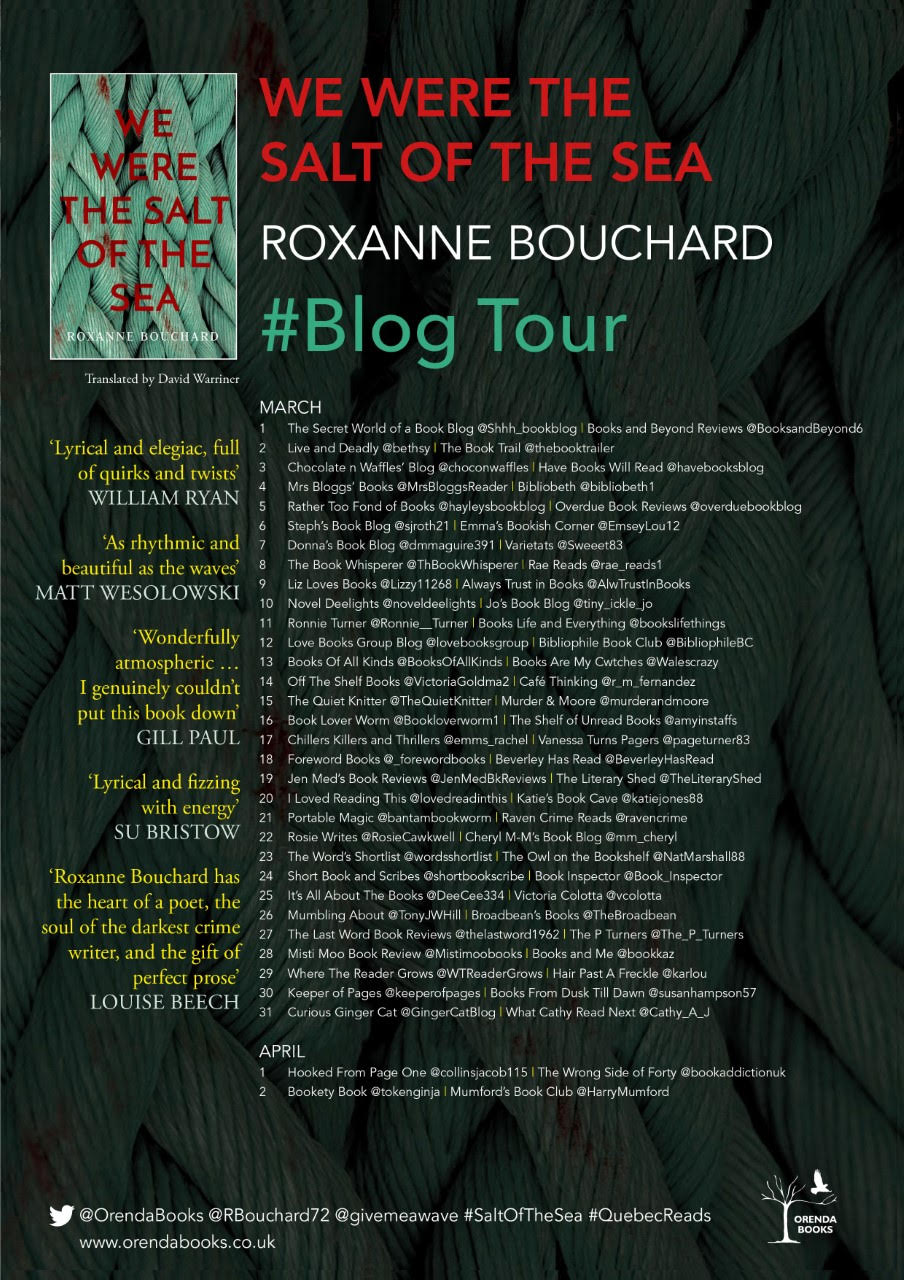 Roxanne Bouchard reads a lot, but she laughs even more. Her first novel, Whisky et Paraboles, garnered an array of prestigious awards in Quebec and caught the attention of British researcher, Jasmina Bolfek-Radovani, of the University of Westminster, who saw for herself how Roxanne weaves poetry and geography together to delve into her characters’ intimate worlds. This desire for intimacy permeates all of Roxanne’s novels, as well as her play, J’t’aime encore, and her published essays, which have focused on the human aspects and impacts of the military. In 2013, the publication of her private correspondence with Corporal Patrick Kègle, entitled En terrain miné, started quite the conversation.

This thought-provoking discussion about the need for weapons was a stepping-stone for Roxanne to undertake unprecedented research at Quebec’s largest military base. Meeting and speaking with dozens of women and men who served in Afghanistan in 2009 inspired her to write a collection of hard-hitting short stories, Cinq balles dans la tête, slated for publication in autumn 2017.

We Were the Salt of the Sea is Roxanne Bouchard’s fifth novel, and the first to be translated into English. As much a love story and a nostalgic tale as it is a crime novel, it was shortlisted for a number of crime fiction and maritime literature awards in Quebec and France. It haunts people’s memories, ties seafarers’ hearts in knots and seeps its way into every nook and cranny, but most importantly, the sea in this book is a calling for us all to set our sails to the wind. Roxanne Bouchard is currently writing an essay on literary creativity and plotting Detective Sergeant Joaquin Moralès’s next investigation.

18 thoughts on “Sea Sick or Life Sick? We Were the Salt of the Sea by Roxanne Bouchard @OrendaBooks @RBouchard72”