A huge thank you to Karen Sullivan and Anne Cater for providing me with a copy of this book in exchange for an honest review as a stop on this fantastic tour!

Ran McGhie’s world has been turned upside down. A young, lonely and frustrated writer, and suffering from mental-health problems, he discovers that his long-dead mother was related to one of Glasgow’s oldest merchant families. Not only that, but Ran has inherited Newton Hall, a vast mansion that belonged to his great-uncle, who it seems has been watching from afar as his estranged great-nephew has grown up. Entering his new-found home, it seems Great-Uncle Fitzpatrick has turned it into a temple to the written word – the perfect place for poet Ran. But everything is not as it seems. As he explores the Hall’s endless corridors, Ran’s grasp on reality appears to be loosening. And then he comes across an ancient lift; and in that lift a mirror. And in the mirror… the reflection of a woman… A terrifying psychological thriller with more than a hint of the Gothic, House of Spines is a love letter to the power of books, and an exploration of how lust and betrayal can be deadly…

Michael Malone. The author of my very first and all time favorite book A Suitable Lie. You weren’t nice to House of Spines! You had set the bar so high with my first encounter with your stories I was afraid both this new book and myself would fall from the 60th floor and crash on the concrete ground.

It did not happen.

Well, I fell. But House of Spines is a slow, claustrophobic, and disturbing fall I couldn’t help but enjoy with every fiber of my being. Although the story differed strongly from what I was expecting, the writing felt safe. It was actually the only thing I felt safe with the book! Beautiful, like a string of fascinating words given new a meaning when put together. Skilled, like the sharp blade of a razor. Riveting, like a obsessive puzzle with missing pieces. Once I had started, I just couldn’t stop reading.

I am extremely sensitive and prone to critics when certain tools are used in a book. Here, the very essence of the main character is tainted by mental health issues, and that is something that had my heart tighten and my head instantly create a wall of disbelief.

What he would give to be able to just do the simple things, engage in life, without the unceasing, accusing monologue going on in his head.

I would not trust Ranald. I would not take anything written for granted. But of course, when an author like Michael J. Malone plays with your mind, puts his hand on your head and pushes it into a gothic and unreliable pool of dark water in which everything is distorted, you are trapped and you have no other choice than to breathe and keep on reading!!! How I prepared myself and entered the book did not matter, I felt the urge to lose myself in Ranald’s world and let it take me wherever.

Remember the wuss in me? Well, humans scare me more than monsters with tentacles. House of Spines toyed with this fear and had me on the edge of my seat, not with sensational scenes, but by creating a creepy and unnerving picture in front of my eyes. Inheriting a house is a good thing, right? Fairy tales and news tell us to be careful, scams are around the corner. I’ll never meet the lawyer who calls me to let me know I got a house from a distant relative!!!!

Even if I had the feeling things would go very wrong very fast, I did not see It coming. House of Spines uses elements we are used to, like the inheritance, or other relatives to deal with, family histories, little community talks, big and haunting houses. Yet, the author takes the gothic theme to another level, stirring and mixing, dredging and seasoning a story with the darkest eerie ingredients. Readers, be warned, you will be utterly disturbed! I know I was. I still am! I love walking on the line between reality and imagination. Here, Michael J. Malone has both hands on each ends of the line, and he shakes it with all his strength, turning his readers into acrobats forced to grab anything at hand to stay standing up and avoid tumbling down the darkest void.

House of Spines is a masterfully written play giving “scary” his strongest and yet most natural face.

You can find the book on the Orenda Books e-store or Amazon!

I was lucky to see Michael agree to take part in the Orenda Month back in March so here are more information about him! 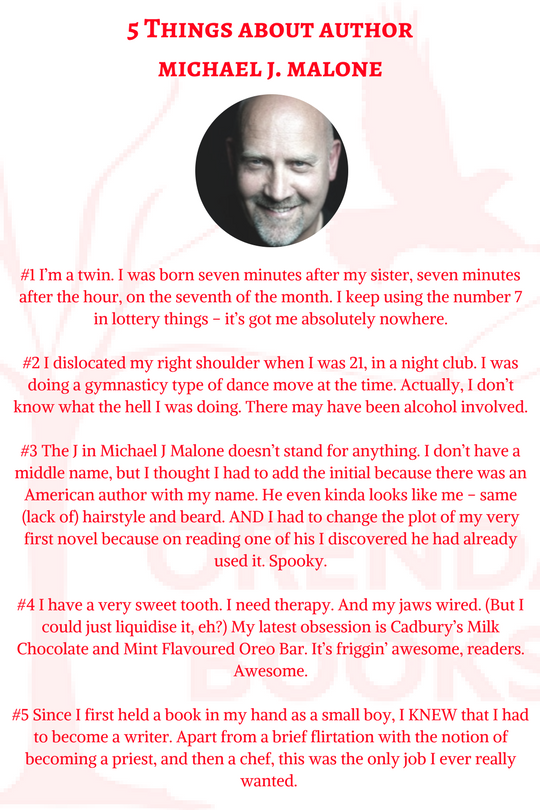 Michael Malone is a prize-winning poet and author who was born and brought up in the heart of Burns’ country, just a stone’s throw from the great man’s cottage in Ayr. Well, a stone thrown by a catapult. He has published over 200 poems in literary magazines throughout the UK, including New Writing Scotland, Poetry Scotland and Markings. His career as a poet has also included a (very) brief stint as the Poet-In-Residence for an adult gift shop. Blood Tears, his bestselling debut novel won the Pitlochry Prize (judge: Alex Gray) from the Scottish Association of Writers.

Other published work includes: Carnegie’s Call (a non-fiction work about successful modern-day Scots); A Taste for Malice; The Guillotine Choice; and Beyond the Rage. His poetry includes: In The Raw, Running Threads and Lip Synch. Michael is a regular reviewer for the hugely popular crime fiction website www.crimesquad.com. A former Regional Sales Manager (Faber & Faber) he has also worked as an IFA and a bookseller. A Suitable Lie will be published by Orenda Books in September 2016.

Don’t forget to check all the fabulous stops on the tour!