I am honored to be sharing this last stop on the blog tour for Till The Dust Settles with the fabulous Jen @Jen Med’s Book Reviews!

The lives of two women who never meet are about to collide.

Lucie married young. Her husband has become abusive, controlling and violent.  Having lost everything as a result of the marriage, Lucie decides it is time to walk away.

As she leaves the house on the morning of September 11th, heading to a job interview at the World Trade Centre and the promise of a new life, the unthinkable happens.

On a street in New York, choking on the dust, Lucie stumbles upon an opportunity for a new life.

She thought the grass would be greener. But starting again is never that simple…

Sometimes, what lies ahead is even more deadly.

I was 10, waiting for my birthday a week later, and sick at home on this fateful Tuesday. I was watching cartoons on TV when the breaking news logo appeared on the screen. At that time, I was already obsessed by the country, my head and the walls of my bedroom filled with pictures of all the places I wanted to visit in the US, including New York of course.

I witnessed it all. I was glued to the TV, feeling in my stomach that the images I was trying to process were real. I had no idea the shift it would bring to our world, but the little girl sitting in her living room cried for hours.

I am not American. I have American friends. I have always felt a weird connection to that day, probably because it all unfolded in front of my very young eyes. I remember my family asking me if it had changed anything in my wish to go there. I remember my voice firm and resolute when I said “No. I’m going.” I still believe that.

Sixteen years have passed and I hesitated before agreeing to review Till the Dust Settles. Because the images, the feelings still bring tears to my eyes. But I am glad I eventually gave the book a chance. It was difficult at times, but necessary. Now off to the real review instead of the tale of my life!

I think it was a bold move from the author to use 9/11 as the background to her story. I haven’t read anything like this before. I remember watching a movie with Robert Pattinson which hinted at the event at the end, but so far, I had believed the tragedy was being avoided. It’s a personal feeling, there are probably other stories involving the horrendous events of that September morning, but I have made a good job at staying away from them. But it was time to stop avoiding it and face again what has shaped the world as we know it now.

Here, you can’t escape it. Right from the opening, I felt my heart clench and my eyes fill up with tears. The detailed writing brought me back to that day, made me feel I was there. It was as if the words filled a void and could make me “feel” what it was like to run for your life.

This story is a real run for your life for the main character. Lucy was on her way to the Twin Towers, but life took a different turn and she ended up among the hundreds of dust-covered faces, shocked and shaken. I found Pat Young to be very respectful and at the same time very sharp in her narration. The details she inserted recreated the setting in such a vivid way my head could barely handle it. Yet, there was more to the pages than the events occurring, there were things happening to the main character that kept you somehow too busy to process the enormity of the big picture. The confusion was perfectly and painfully spot-on. I was running with Lucy, I was wondering “what the hell?” I was quivering and lost and yet, selfishly caring for her. Fate, serendipity? Call it what you want but suddenly Lucy gets the chance to escape, to be safe… or so she thinks.

I remember all those images hanged on the walls, missing people everywhere. I wasn’t there to witness it but I could picture it, and the book gave me a stronger and better look at the chaos inhabiting the streets. This turmoil is the foundation of the plot and I was hooked. I was holding Lucy’s hand as she let life take her on a different path, almost against her will.

We only learn about Lucy’s past little by little, but by then, I was already completely by her side. Reeling from what had happened, she found herself becoming someone else. I was relieved to see it did not come to her easily and she never really took advantage of it. I could feel her uneasiness and her doubts at her new situation, which was almost as heart-breaking as what was happening. Her life was no fairy tale and I hated her husband before even meeting properly! One of my favorite things about this book is that it is filled with random people, and dangerous ones, at different degrees, all mixed in this together. Everyone has a story, and everyone is affected differently by the events, whether it be the WTC, Lucy’s fate, or their own issues. It takes everything to make a world, and that is what the author gives you. Every secondary character had a purpose, a reason to be, and all were needed for the book to feel genuine.

After the shock came the “what’s next?”, and this is where the story leaves the dusty nest and reveals a gripping plot. Life doesn’t stop, neither does everyone’s actions. While firefighters, officers, people are doing their best, not so far, Lucy finds solace in a new identity, only to be thrown in a different kind of nightmare. Starting again is a chance, when you get handled the right cards, but her hand is complicated and her new identity is not one you could envy. At least not on every level. Jimmy Choo shoes were the kind of details that brought half a smile to my face, in such a dark environment, inside and out. I had no idea where the author was taking me, but I was confident and I was not disappointed. Pat Young takes a day no one will forget, and turns its aftermath into a race to find a truth, many truths, that bring goosebumps to your arms and make you wonder about how rotten, how selfish, how ruthless people can be. Horror, conspiracies, lies, domestic abuse, so many subjects and so many threads leading to an ending I was not expecting! I will nonetheless say the last pages felt a little too rushed and cleanly tied up for my taste, but it doesn’t take away the strength of the overall story.

The style of writing makes you wander through so much within so little pages, its smooth flow and sharp claws keeping you reading, taking you from one day to another, with its surprises, its hardships, its small rainbows.

I am rambling, I know, but this review is one of the most difficult I have had to write. Not because the story is bad but because I can’t find the words to convey the million of emotions I felt throughout the book.

Till the Dust Settles takes a turn on one of the most awful days of our history and builds and intense, gut-wrenching, powerful and compelling thriller served by genuine, terrific, and most of all “human” characters. 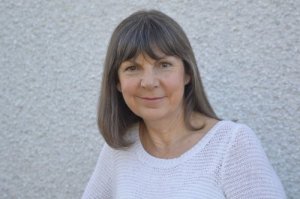 Pat never expected to be a writer. Then she found a discarded book with a wad of cash tucked in the flyleaf. ‘What if something awful happened to the person who lost this book?’ she thought, and she was off.

Pat knew nothing of writing, but she knew a thing or two about books, having studied English, French and German at Glasgow University. A passion for languages led to a career she loved and then a successful part-time business that allowed her some free-time, at last.

Pat had plans, none of which included sitting at her desk from daybreak till dusk. But some days she has to. Because there’s a story to be told. And when it’s done, she can go out to play. On zip-wires and abseil ropes, or just the tennis court.

Pat writes psychological thrillers. Till the Dust Settles is her debut, from Bloodhound Books.

I would like to thank Bloodhound Books for giving me the opportunity to take part in this amazing blog tour. The unbiased review above is my thank you to them and the author. Check out the previous stops to learn more about the book!