It’s been so long since my last TWIB post that I’ll only add the very last reads I’ve had!

When Hedda Hellberg fails to return from a retreat in Italy, where she has been grieving for her recently dead father, her husband discovers that his wife’s life is tangled in mystery. Hedda never left Oslo, the retreat has no record of her and, what’s more, she appears to be connected to the death of an old man, gunned down on the first day of the hunting season in the depths of the Swedish forests. Henning Juul becomes involved in the case when his ex-wife joins in the search for the missing woman, and the estranged pair find themselves enmeshed both in the murky secrets of one of Sweden’s wealthiest families, and in the painful truths surrounding the death of their own son. With the loss of his son to deal with, as well as threats to his own life and to that of his ex-wife, Juul is prepared to risk everything to uncover a sinister maze of secrets that ultimately leads to the dark heart of European history.

Review coming on Saturday! I cannot wait!! Can you guess if I liked it? :p

Just a coincidence? Rebecca wants to believe so… But as the police start to draw parallels between Chris and Kayleigh, it’s getting harder for her to trust his innocence.

Faced with an angry town that believes Chris has abducted the teenager, Rebecca tries to discover the truth.

But what she finds shocks her more than she ever thought. How well does she really know the man she loves?

A completely gripping, suspenseful thriller, with a shocking twist. Fans of Louise Jensen, K.L Slater and and The Girl on the Train will be hooked until the very last page.

Because there’s an exception to everything, this book did not win my heart! Learn why next Monday!

A woman is on trial for her life, accused of murder. Each of the 12 members of the jury has his or her own burden of guilt and prejudice which could effect the outcome. Hailed as one of the best mysteries of the year when it was first published in 1940, this book has become a classic of the genre.

Nope. Your eyes did not deceive you, this is a classic!! You’ll have to wait for another Quickies to get my review, but I enjoyed it!

The Lost Wife (also known as Since You’ve Been Gone), Anna Mansell

How do you live without the one you love?

Since Rachel lost her mother she has drifted through life, never settling down. Then she meets Ed, recently widowed and with a new baby, and is compelled to help him and his son.

Ed is struggling to cope, and his friends and family all tiptoe around his grief. Rachel is the only one who sees him as more than just a widower, and the pair soon grow close.

Then Rachel discovers something Ed’s wife was hiding from him – something that changes everything. But she knows that memories of lost loved ones are precious, and should be protected at all costs…

Can Rachel help Ed learn to live in a world where his wife is no longer around to tell her side of the story? And can Ed help Rachel to finally open her heart to a happy future?

Since You’ve Been Gone is a compelling and poignant story about love, loss, and family secrets, perfect for fans of Jojo Moyes, Dani Atkins, and Kelly Rimmer.

≈ Now ≈ Till the Dust Settles

The lives of two women who never meet are about to collide.

Lucie married young. Her husband has become abusive, controlling and violent.  Having lost everything as a result of the marriage, Lucie decides it is time to walk away.

As she leaves the house on the morning of September 11th, heading to a job interview at the World Trade Centre and the promise of a new life, the unthinkable happens.

On a street in New York, choking on the dust, Lucie stumbles upon an opportunity for a new life.

She thought the grass would be greener. But starting again is never that simple…

Sometimes, what lies ahead is even more deadly.

This sounded too good to miss out on the opportunity to read it!

∨ Next ∨ The Girls in the Water, Victoria Jenkins 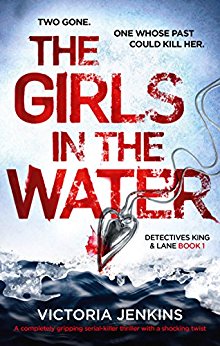 ‘The first one had been an accident. He had never intended to kill her. But as he looked down at her body, he knew there would be a next one…’

When the body of Lola Evans is found in a local park on a cold winter’s morning, Detective Alex King and her new recruit Chloe Lane are called in to lead the hunt for the killer.

Days later, a second girl goes missing. It seems the two shared a troubled history, and were members of the same support group. Who is the monster preying on these vulnerable girls?

As the detectives start to piece together the clues, Chloe realises that she too is in danger – as she uncovers secrets about her own brother’s death which someone will kill to keep hidden.