You thought I was gonna leave you before the very end of March? I couldn’t possibly do that! Especially when I still have lovely people to add to the Orenda Tree! What kind of host leaves her guests in the hallway?

What do you know about Steph Broadribb?

I know I keep hearing about her book and it comes with high praise and surprise I haven’t added it to my reading list already!!

Here comes three new recommendations! I haven’t read any of Mary Kubica’s stories yet.. I feel so late on everything!

I admit I take my Kindle everywhere but near a bathtub. I’m too afraid, even though I’m an Amazon premium member so I would receive another one fast. I can’t imagine replacing my baby!!! When I read on the bed, I have a tendency to fall asleep, even if I am loving the book and it’s a gripping story, because of the meds I’m taking, so I stay sitting very straight as long as possible but it doesn’t always work! I should be thankful I’ve never drooled on the Kindle.

I love writing in the morning, it’s the moment I feel the more energized!

Steph Broadribb was born in Birmingham and grew up in Buckinghamshire. Most of her working life has been spent between the UK and USA. As her alter ego – Crime Thriller Girl – she indulges her love of all things crime fiction by blogging at www.crimethrillergirl.com, where she interviews authors and reviews the latest releases.

Steph is an alumni of the MA in Creative Writing (Crime Fiction) at City University London, and she trained as a bounty hunter in California. She lives in Buckinghamshire surrounded by horses, cows and chickens. Deep, Down, Dead is her debut novel.

What do you know about Michael Grothaus? 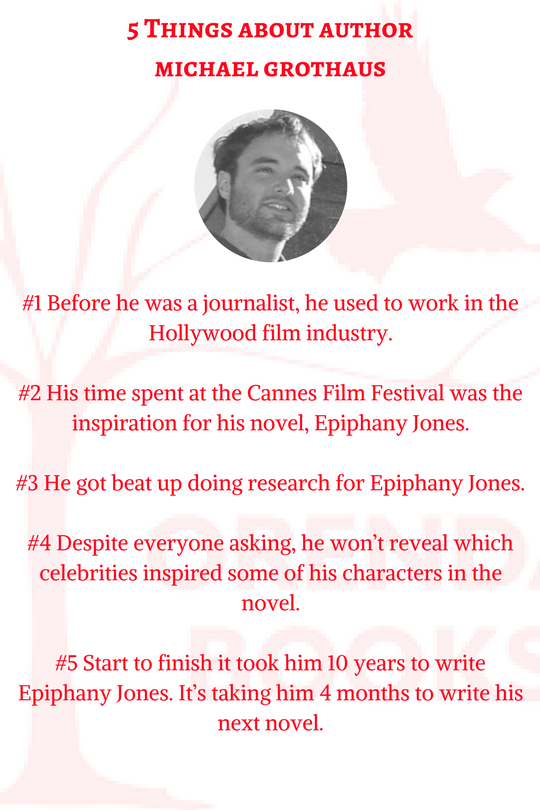 This is devotion for a book! I went to the Cannes Film Festival but of course did not see anyone or anything interesting!

Michael Grothaus is a novelist and journalist who spent years researching sex trafficking, using his experiences as a springboard for his debut novel Epiphany Jones. Born in Saint Louis, Missouri in 1977, he spent his twenties in Chicago where he earned his degree in filmmaking and worked for institutions including The Art Institute of Chicago, Twentieth Century Fox, and Apple. As a journalist he regularly writes about creativity, tech, subcultures, sex and pornography, the effects of mass media on our psyches, and just plain mysterious stuff for publications including Fast Company, VICE, Guardian, Engadget, and more. He’s also done immersion journalism at geopolitical events including the Hong Kong protests against Beijing in 2014. His writing is read by millions of people each month. Michael lives in London. 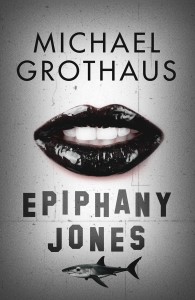 What do you know about Paul E. Hardisty?

I know I was hugely impressed by The Abrupt Physics of Dying and that it takes a brilliant writing and lots of talent to make me appreciate an action thriller! I can’t wait to read the next two books in the Claymore Straker series!

I also know that Paul is one of the few writers who took their task so seriously that I had to switch the bio into the nice graphic because their 5 facts would be too much to fit in haha! You’ll find his facts right under the biography!

#1 French is my first language, the language of my childhood. I am Canadian. When I write, and when I am speaking, there are often times when I know exactly what I want to say in French, but can’t bring up the right word in English. Sometime English just doesn’t cut it. I still read every second novel in French. The last one I read was La Carte et le Territoire by Michel Houellebecq, one of my favourite authors.  He’s tough and uncompromising, but brutally honest.

#2 I moved to Western Australia in 2006 with my wife and two sons, from Cyprus. We lived in Cyprus for eight years, where I ran my company’s middle east and Africa business (environmental and water engineering consultancy). I started the company with four friends when I was in my twenties, in Canada, and built it up over 18 years. When we sold the company in 2006 to a big Australian engineering company, we had over a 1000 staff worldwide.

#3 I’ve had my nose broken five times, all in fights. I used to fight a lot, when I was young. Street fighting. I won about half of them. The last one happened on New Year’s eve in Calgary, Canada, in a restaurant. My wife tried to stop the drunk restaurant owner from beating his Asian cook. My wife intervened and threatened to call the police. The guy, enraged, turned on her. I had to put myself between them. The guy charged me and we went through the plate glass window out into the frozen parking lot. He took the worst of the glass on the way out.  Outside, he came at me again. I do martial arts so it was over pretty quickly, the guy lying there in the snow leaking blood from a broken nose and glass cuts to his arms. Blood on snow is pretty spectacular. Anyway, I’ve turned this incident into a short story in the new collection I’m working on.

#4 I wrote my first story at 5 years old, on my father’s old typewriter. I think I always wanted to be a writer. At nineteen, enamoured by Hemingway and Lawrence and Balzac, I decided that’s what I would do. I started working hard at it, getting up early, took time off from all the things others thought I should be doing. But it was a disaster. I could write – put the words together on the page – but I had nothing to write about. I didn’t know anything. I hadn’t done anything, gone anywhere. So I decided to get out there and live. Do something I really cared about, something that mattered. I took work in the scariest places I could get, pushed myself into crazy situations, pushed into my fears. Hence the fighting. And then, in 2001, a few glimmers started to appear. By 2010 I had my first novel in some kind of shape. THE ABRUPT PHYSICS OF DYING – based on experiences I had in Yemen in 1994 as the civil war erupted. I found an agent, polished the book, and then Karen read it, and I was off and running.

#5 I do long distance triathlon (swim – bike – run), to build toughness and endurance, mental and physical. There is something about pushing those limits of what you think you can do, which I find incredible empowering. I don’t think it’s a coincidence that I started really writing at about the same time as I started taking triathlon seriously. (Ironman triathlon race: 3.9 km open water swim; 180 km bike, 42.2 km run (marathon), back to back).

I find it very funny because for me French often doesn’t cut it! I know exactly what I want to say and how to express it in English but I am unable to do it in my native language. It takes a lot to make me read in French these days (hint: an Orenda Books author makes me want to!)

Poor, poor nose. I went to the bathroom in the dark the other day and crashed into the wall so hard I thought I had broken my nose. We need to take better care of those little shapes on our faces!

Both the company and the triathlon are impressive!

Find Paul on Twitter: @Hardisty_Paul and my review of The Abrupt Physics of Dying here!

What do you know about Antti Tuomainen?

I know I had to rewrite his last name three times, I am terrible with names!!! I also know that I’m very intrigued by The Mine!

Louis-Ferdinand Céline’s book is on my reading list, it’s one of the few things I’ll agree to read in French.

Finnish Antti Tuomainen (b. 1971) was an award-winning copywriter when he made his literary debut in 2007 as a suspense author. The critically acclaimed My Brother’s Keeper was published two years later. In 2011 Tuomainen’s third novel, The Healer, was awarded the Clue Award for ‘Best Finnish Crime Novel of 2011’ and was shortlisted for the Glass Key Award. The Finnish press labeled The Healer – the story of a writer desperately searching for his missing wife in a post-apocalyptic Helsinki – ‘unputdownable’. Two years later in 2013 they crowned Tuomainen “The king of Helsinki Noir” when Dark as my Heart was published. With a piercing and evocative style, Tuomainen is one of the first to challenge the Scandinavian crime genre formula. Antti Tuomainen’s latest novel The Mine will be published by Orenda Books in 2016/17.

“Antti Tuomainen is a wonderful writer. His characters, plots and atmosphere are masterfully drawn.”
–Yrsa Sigurdardottir

What do you know about Thomas Enger?

I know all of his books are in my Kindle and I am dying to read them. I know Cursed was everywhere and I loved the praise it received. I can’t wait to experience his writing!

Okay for history, but sports I could never get any good points unless it was a yoga class!

Soccer is one of the few sports I understand the rules of because practicing it was compulsory at school. I prefer Rugby but I’m glad I only had one semester playing in the mud trying to stay alive. Rugby is better on TV!!!

We need more kindness in this world right now.

Thomas Enger (b. 1973) is a former journalist. He made his debut with the crime novel Burned (Skinndød) in 2009, which became an international sensation before publication. Burned is the first in a series of 5 books about the journalist Henning Juul, which delves into the depths of Oslo’s underbelly, skewering the corridors of dirty politics and nailing the fast-moving world of 24-hour news. Rights to the series have been sold to 26 countries to date. In 2013 Enger published his first book for young adults, a dark fantasy thriller called THE EVIL LEGACY, for which he won the U-prize (best book Young Adult). Enger also composes music, and he lives in Oslo.

What do you know about Sarah Stovell?

I know the cover of her book reflect its title, it is Exquisite! And it’s one of the most anticipated book around!

I cannot imagine my life without tea! It doesn’t help that I can’t stand any other hot drinks, but I love tea too much to let it go!

Sarah Stovell was born in 1977 and spent most of her life in the Home Counties before a season working in a remote North Yorkshire youth hostel made her realise she was a northerner at heart. She now lives in Northumberland with her partner and two children and is a lecturer in Creative Writing at Lincoln University. Her debut psychological thriller, Exquisite, is set in the Lake District. 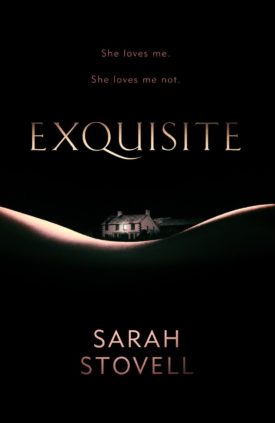 That’s all for today! One more Branches post and we will have meet most of the authors and translators at Orenda Books!

I would like to send my biggest thanks to all the authors and translators for finding the time to take part in the Orenda Month and for allowing people to get to know them better. Go Team Orenda!

Don’t forget to enter the Rafflecopter Giveaway to win the signed copy of the Orenda Books story of your choice!!

Let Rafflecopter make a happy reader out of you!

See you tomorrow for the final Branche!

20 thoughts on “#OrendaMonth The Team’s Tree: The Branches (part 4) @OrendaBooks”