I cannot believe I am late to the party to one of my favorite couple’s Valentine’s Day release! But let me make amends and try to convey just how good Parker is, if you don’t already know it! 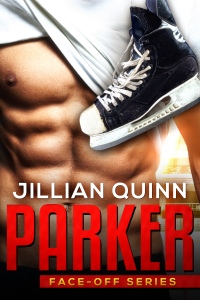 Former collegiate athlete and successful sports agent, Charlotte “Coach” Coachman, is a straight shooter who has a very strict policy—no dating clients. The loves of her life are coaching little league basketball and managing the careers of her players, leaving no room for men.

Coach hasn’t met an athlete she couldn’t handle and a deal she couldn’t close—until she meets Alex Parker—the NHL’s most notorious bad boy both on and off the ice.

Alex is the best defenseman in the league, breaking records along with hearts. He’s made a name for himself as a womanizer, and after a scandal involving the owner’s granddaughter, Alex is traded to Philadelphia. Still reeling from the loss of his father, Alex is on a downward spiral, drowning himself in booze and women, until Coach takes him under her wing.

She might be attracted to the sexy hockey star, and certainly not immune to his charms, but Coach can see that Alex needs her help, and coaching players is what she does best. Now that the lines are blurred and the passion between them is too strong to deny, Coach has to decide if Alex is worth making an exception to her rules.

Do you know anything about sports? Is every rule of every sport tattooed in your mind? Do you always watch the games? Yeah, me neither. Except for Rugby games involving France where I eat Big Macs and almost throw up every five minutes because it’s hard to stuff your face and scream at the screen at the same time.

In that case, you might rightfully wonder what a book like Parker does on my reading list. I was the first surprised. Remember when I said romance was not really my thing? Well, it is when they come from Jillian Quinn.

It is hard not to be biased when abs are involved, but I promise the following review was written without any pressure from the author, our relationship or our love for Italian food.

I don’t know a single think about hockey. Their games don’t even get aired on TV. But Alex Parker is a player. A player tangled up in bad sheets. Literally and figuratively. Since his father’s death, this top of the game hockey man has been rolling down the wrong side of the valley, trying to fill a never-disappearing void with perky tits and booze (Never thought I would use perky tits in a review.) Except it is a terrible idea and totally not working. If he manages to stand on the ice and pretend to be good enough, once on real ground, anything is good to replace feelings and memories by emptiness and blankness.

One too many mistakes lands him in Philly, between the expert hands of Coach. Charlotte Coachman, former player and now top-notch sports agent. If Alex thought he was going to be pampered by a young and naive young woman ready to answer to his every need and demand, he got it all wrong. Coach did not get an A-list client by rubbing them the right way, but by working twice as hard as anybody else to make herself a place in the sun.

So far, a regular story of two characters bumping each other thanks to life’s twists.

Comes the first break. (Are they called breaks in hockey???)

Both characters carry a strong and devastating background luggage. The difference is one is fighting the weigh to stay afloat while the other one is drowning.
What first looked like the story of a professional relationship turned hotly wrong suddenly became the take of how meeting the right person at the right time can save your life, in more ways than one.

I am not used to women in sports, except for an old teacher who actually looked a lot like a guy… So I was curious about Coach. Navigating between sharks to get her clients the right deals in a world led by testosterone is scary, at least for me. I have no idea what it entails but the author does know what she’s doing and allows you a glimpse of what life looks like in the shadow of athletes. Meeting Coach was a delight, she is not your nice and cute girl and this is refreshing. Yet, she is confident enough to not overdo it and play it like a guy. She’s just a woman with a single rule and a strong sense of loyalty. You don’t sleep with clients, and you don’t screw over the man who believed in you when everyone thought you were over. She likes to sweat and she gets the work done. My favorite kind of girl. Yes, she is hard-boiled and won’t hesitate to tell you with a straight face that you’re a pain in the ass, but underneath this very professional side, there is so many emotions and layers to Coach that you cannot help but find something to resonate with you. She is not afraid to lose the mask with her friends, to let people know she cares, she is resilient but soft. A real gem and someone I’d love to have as my friend. She could explain all sports rules to me while I drool on the players and try not to choke on popcorn.

Parker is not the usual bad guy. Actually, he is not a bad guy at all. He is your regular (well, very muscular for a regular but still) young man trying to make a living from his passion. He hasn’t always had it nice and easy and you can feel it from the start. I was not convinced by his bad-boy attitude, I could feel his behavior was unusual and I started praying someone who see it too, shake the hell out of that sexy guy and bring him back on the right track. It was painful to see Parker drowning so I was rooting for him all the way. There might have been some swooning along the way, I blame my ovaries and Valentine’s Day advertisements.

Sparks between Coach and Parker fly before they even meet in the flesh and their chemistry springs off the pages despite the rules and hardships. Don’t expect insta-love from Jillian Quinn, she’s the queen of insta-lust turned into so much more. Watching their relationship blossom in ways you don’t expect from what seems to be a light read is tremendously enjoyable. Even my prude side took pleasure in reading about their … adventures.

If I had to choose one favorite element of this story it would be the surprise. Parker is a Kinder egg. You expect an easy and sweet story about hot as hell people and you get complications, dark nights, happy days and difficult choices. You get the whole package of a realistic love story, with the luggage, the well-thinking friends, the problems, the pain, the uncertainty, the hope. The author made the choice to add different and unusual sides to this story and they hit you right in the gut, my emotions were all over the place as I learned to love all the people living through the pages.

Thankfully, once again, I did not get stuck with two lovers in their own little world. Friends, teammates, bosses, you get them all, and with them their nosey sides and their needed (or not) help. Because no matter what we say, a relationship rarely involves only two people, it reflects on every person close to the lovers, it influences friendships, it strengthens bounds, it challenges ties. I never believed in the say that people in love are on their own. People are more than just a couple, they are a planet with satellites all around and life is a game in which you have to align them all (and keep them this way) to make it work (work in progress for your entire lifetime but that’s the rule of the game!) Juggling with it all it what makes it all worth it in the end. Jillian Quinn knows that and makes sure her characters learn the lesson.

The spicy and unique writing prevents this story from falling into the pitfall of looking like coming straight out of a soap opera episode. You can count on fantastic one-liners and the right balance between what makes a relationship so good: Jillian Quinn gave intimacy a chance to show all its faces and it resulted in one of my favorite love stories and a couple I won’t forget.

You can now find Parker available HERE. Also, if you’re a lucky Kindle Unlimited member, you can read it for free! Just jump on those abs already!

I would like to thank Jillian Quinn for trusting me with her work and allowing me to review her second book.