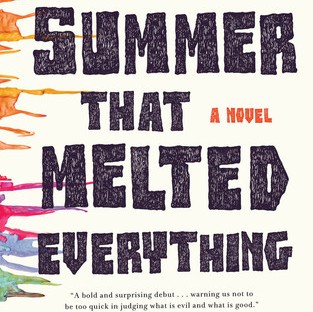 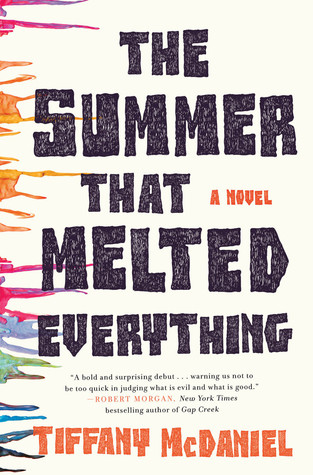 Fielding Bliss has never forgotten the summer of 1984: the year a heat wave scorched Breathed, Ohio. The year he became friends with the devil.

Sal seems to appear out of nowhere – a bruised and tattered thirteen-year-old boy claiming to be the devil himself answering an invitation. Fielding Bliss, the son of a local prosecutor, brings him home where he’s welcomed into the Bliss family, assuming he’s a runaway from a nearby farm town.

When word spreads that the devil has come to Breathed, not everyone is happy to welcome this self-proclaimed fallen angel. Murmurs follow him and tensions rise, along with the temperatures as an unbearable heat wave rolls into town right along with him. As strange accidents start to occur, riled by the feverish heat, some in the town start to believe that Sal is exactly who he claims to be. While the Bliss family wrestles with their own personal demons, a fanatic drives the town to the brink of a catastrophe that will change this sleepy Ohio backwater forever.

This book was a discovery. You know how some stories make you think for days after you finished them? Then you start babbling about it and you just can’t shut up, until your husband/kids/mother/best friend/neighbor/cashier/banker/stranger in the street/*add random people* can’t take it anymore and yells at you to get over it. At the end of the day, everyone is dreaming about shoving a giant scarf down your throat to never hear your voice again?
The Summer That Melted Everything did that to me. Hopefully, it will be the same for you.

I will say that 1984 was a year that understood how to make history.

What does 1984 represent for you? For Fielding Bliss and his family, it is the year they welcomed the devil into their house. Except this devil doesn’t have horns, neither is he surrounded by eternal flames. Sal is a thirteen-year-old boy with a strong craving for ice cream, overalls too big for him, and too much wisdom for his age. No one really believes him when he claims to be the devil answering the invitation published in the town’s newspaper. Or, don’t they? As the heat envelops Breathed and its inhabitants, the black boy’s arrival sparks reactions. One thing leading to another, the summer of 1984 leaves scars on everyone’s heart and mind.

“I know the sins of everyone who comes to hell. That’s part of my misery. To know and feel theirs.”

Would you believe a boy telling you he is the devil? I sure never imagined him to bear an innocent face and gorgeous green eyes. Sal is everything Autopsy Bliss never expected the devil to be. But he comes with the heat and his claim quickly make the town point their finger at him for everything that happens in Breathed.
Tiffany McDaniel has an original take on what hell is and who hides behind the title of the most famous inhabitant of the place and for me, this only makes this story worth reading. Far away from the usual caricature and the flames, she offers a tragically frightening version of hell, and as the story unfolded, I started to wonder if hell was not already on Earth.

“There ain’t no hiding who we really are.”

This story is definitely character driven. As the heat blurs the lines of good and evil, slowly making sanity go up in smoke, a series of events bring the best… and the worst in people. I won’t delve too much into the plot or characters descriptions because I believe this is one of the books you need to experience to understand. I will say that this fascinating story set in a claustrophobic and heated town allow us to take a closer look at our nature, instincts, and fears. Believe me, it is scary.

1984 seems far away, yet every issue dealt with in the story is bound to resonate with you, as the characters are faced with racism, homophobia, the limits and failures of the legal system, and human behaviors that make you wonder who the devil really is. Yes, just as in 2016.

Pain is our most intimate encounter. It lives on the very inside of us, touching everything that makes us.

The Summer That Melted Everything is a debut novel. I need to write it down to remember it because trust me when you read this story, you won’t believe it either. You won’t find winding and intricate never-ending sentences filled with indecipherable metaphors. Tiffany McDaniel’s writing is beautiful and authentic, it needs no embellishment to convey its message. Her prose irradiates the heat and the tension plaguing the town of Breathed in a powerful way that will transport you to Ohio in the blink of an eye, even if you’re slouched in your couch in freezing Scotland. The book is so well-written it took me ages to pick only a few quotes to add to this review. I did not merely read the story. I lived it. I was revolted, freaked out, moved, relieved, angry, in tears. Crying is not something I tend to do when reading, but Tiffany McDaniel’s words tug just the right strings for the story to become yours, too.

The Summer That Melted Everything is a 5 star story that will make you think about who the devil really is and what hell really looks like.

A copy of this book was provided to me by Tiffany McDaniel and her publisher through NetGalley. This review is my unbiased thank you to them.

Stay tuned for a fun interview with the author next week!

An Ohio native, Tiffany McDaniel’s writing is inspired by the rolling hills and buckeye woods of the land she knows.  She is also a poet, playwright, screenwriter, and artist.  The Summer that Melted Everything is her debut novel.

You can find Tiffany McDaniel on her website @ http://www.tiffanymcdaniel.com

27 thoughts on “Book Review: The Summer That Melted Everything, Tiffany McDaniel”