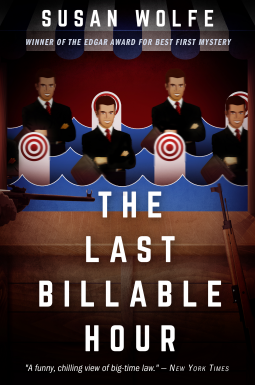 Welcome to the Silicon Valley law firm of Tweedmore & Slyde, where multimillion-dollar deals are the order of the day, ambition runs high, and stabbing a colleague in the back could be taken all too literally.

T&S is a hot firm making a bid to be a major national player when Leo Slyde—the company’s chief rainmaker, its king of the “billable hour”—is found stabbed to death in his corner office. It falls to T&S’s brightest, most unjustifiably insecure young associate Howard Rickover to conduct a risky “inside job” for homicide detective Sarah Nelson. But can Howard flush out a wily murderer among lawyers who do not make it their practice to be caught unprepared—and still keep up with an associate’s impossible workload?

I picked this book thinking nothing could go wrong; it had two of my favorites things: a murder and lawyers. It turns out I need a little more than that to be convinced.

When Howard is hired by Tweedmore and Slyde, he discovers just how little Law school prepare you for the real work. So do we. For the first third of the story, Howard struggles to find a balance and meet deadlines, throwing us Latin quotes and big words like subpoena every couple of page. Any fan of legal drama is in their element witnessing Howard lose sleep and weight as he becomes the partners’ slave. I really enjoyed that part at first, but it soon became repetitive.

This books starts off quite slow and never really manages to build up speed or tension. I really hoped the killing of Mr. Billable would set the wheels in motion, but even as Howard gets hired by the detective to dig around and help with the investigation, the pace remained sluggish.

Throughout the book, I had the feeling the actual plot was Howard’s life as an associate, the murder only being an element for him to work on. Despite a few red herrings thrown at them, neither the police nor Howard needed to dig very deep to find clues and answers which were served to them on a silver plate. I found it hard to believe that seasoned lawyers and secretaries, known for keeping their mouths shut, would ever turn to a first-year associate to spill the beans. There were too many characters and too little to tell them apart, which really confused me until late into the story.

The story between Sarah and Howard fit perfectly into the investigation, although it felt sometimes a little rushed or unnecessary. There are small changes in Howard as he experiences what it really means and what it truly takes to be a lawyer, which added depth to a character that otherwise would have stayed in my mind as the insecure overworked guy who did not have the guts to practice law and would never make it to partnership. I was happy to see his character grow and figure things out for himself.

I am glad I read until the last pages, as I felt the ending was okay and saved the story for me.

Overall, this book was a fast read, but definitely not what I had expected. There were just too many details bothering me to really enjoy the book. I cannot give The Last Billable Hour more than 2 stars, although perhaps someone less picky might give it a 3.

I would like to thank the publisher for sending my a copy of this book in exchange for an honest review.