I am taking a break in commenting and reading all the Wednesday post to inform you of a very important change in my life. (You can’t know this because I am typing, but I am using my most formal voice right now) 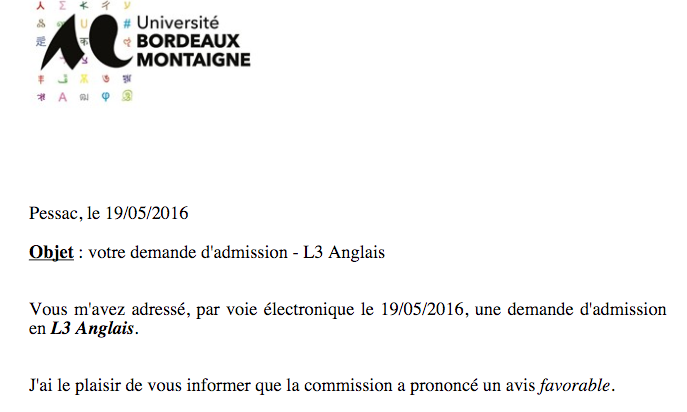 This morning, I received confirmation my wish has been granted! For my final year as an undergraduate, I will be majoring in English!

This is a huge step for me. If you were around when I started blogging, you might remember changing majors was among the goals I was hoping to achieve in 2016. Now that it is happening, I don’t know how I feel (I stopped jumping on the couch only a few minutes ago), but I wanted to share it with you.

For the story, my former degree involved both the English and the Japanese languages, the emphasis being on Japanese and a series of minors such as Law and Economy. It was fine until I realized my passion for the English language was only getting bigger and the only time I was really happy to study was when I was working on it. It is quite uncommon for a student to be allowed to change majors for their final year at university. At least in France. This is why I am celebrating today!

Before I get all excited again and run out the door to let the world know about this big news, I wanted to say thank you to all the bloggers who have been extremely supportive and nice to me. It can be difficult not being an English native speaker in a community where the majority of people are, but you have never make me feel out of place, and your kind words dismissed the insecurity I felt sometimes. So, I am sending virtual hugs as a token of my appreciation. I am aware waffles would have had a greater effect, but I have yet to find a way to send food through WordPress.