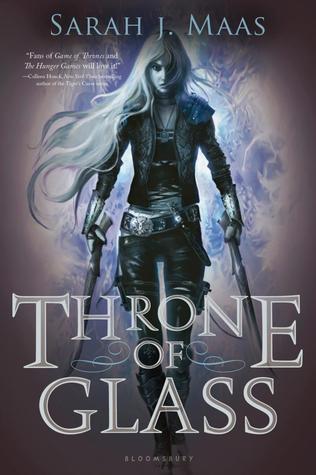 Celaena Sardothien is an assassin. Well, she was. The mistake of being caught a year ago drove her to become a slave in the salt mines of Endovier. But one day, she gets summoned by Prince Dorian to be offered an opportunity: be his champion in a competition to find the next Royal Court assassin. Winning this contest would secure her freedom after four years serving as the King’s hand. But as if the contest was not difficult enough, contestants start dropping like flies. As she investigates the murders, Celaena will uncover bigger mysteries and be faced with more questions than answers.

Okay, let’s start with the obvious. Celaena Sardothien, famous around the bloggosphere to be one of the most bad-ass character that ever walked a fictional planet. Well, I am still waiting to meet her. The young woman portrayed in Throne of Glass is first and foremost vain. I love multi-layered characters. Of course, an assassin can care about her clothes, maybe even her hair (perfect place to hide a weapon). But you cannot spend half the book thinking about these. Not when you’re supposed to be killing people since you were a very young girl. A third of the story is spent reminding us she is an assassin. The best. Not afraid. A real professional. Again, where is the proof of that? Saying something doesn’t mean it’s true. And the author’s habit of pointing out there is not an ounce of weakness in her characters with one repeated sentence doesn’t help.

It is rather annoying. If you want us to believe your characters are strong and fearless, please portray them as such. Celaena only appeared to me as a lady, way too eager to get chummy with the people who are keeping her captive. Which brings me to the last third of the story: the bad-ass killer caring much more about boys than about the events occurring around her. Yes, she is young, we all know how this detail can impact someone’s attention span and focus. But when a strange man comes to bring you back to a castle where the Royal family you despise live, your first thought is not “hm, that guy is sexy.” I do not hate Celaena, I am only hoping she gets more mature as the story unfolds.

A thing that is lacking in this book is subtlety. Although it did not bother me in itself, the love triangle is obvious from the beginning and the two young men in this contest are the perfect cliché every assassin would fall for. Okay, I am being mean. Chaol is the sexy head of the Royal guard, a mystery man, a master of weapon and combat. Prince Dorian is a handsome reader with a heart, trying to get away from his father’s power.
I don’t dislike the two of them, some of their lines are very good and even though their actions and reactions are predictable, both are suited for their jobs in the story.

The Favorite Character award goes to Nehemia. We don’t often get a female friendship that doesn’t entirely revolve around boy talks, so it is worth noticing. Moreover, Nehemiah is a mysterious character with a sharp mind and a sharp tongue. I became more and more intrigued about her as the story evolved. I really hope she gets to appear in the rest of the series.

Special mention to the pronunciation guide set at the end of the book. I wish I had been aware of it when I started reading, because I spent the entire story calling Chaol sometimes that sounds like “coal”. The places received the same kind of treatment, the worst being figuring out how to pronounce Wyrdmarks. 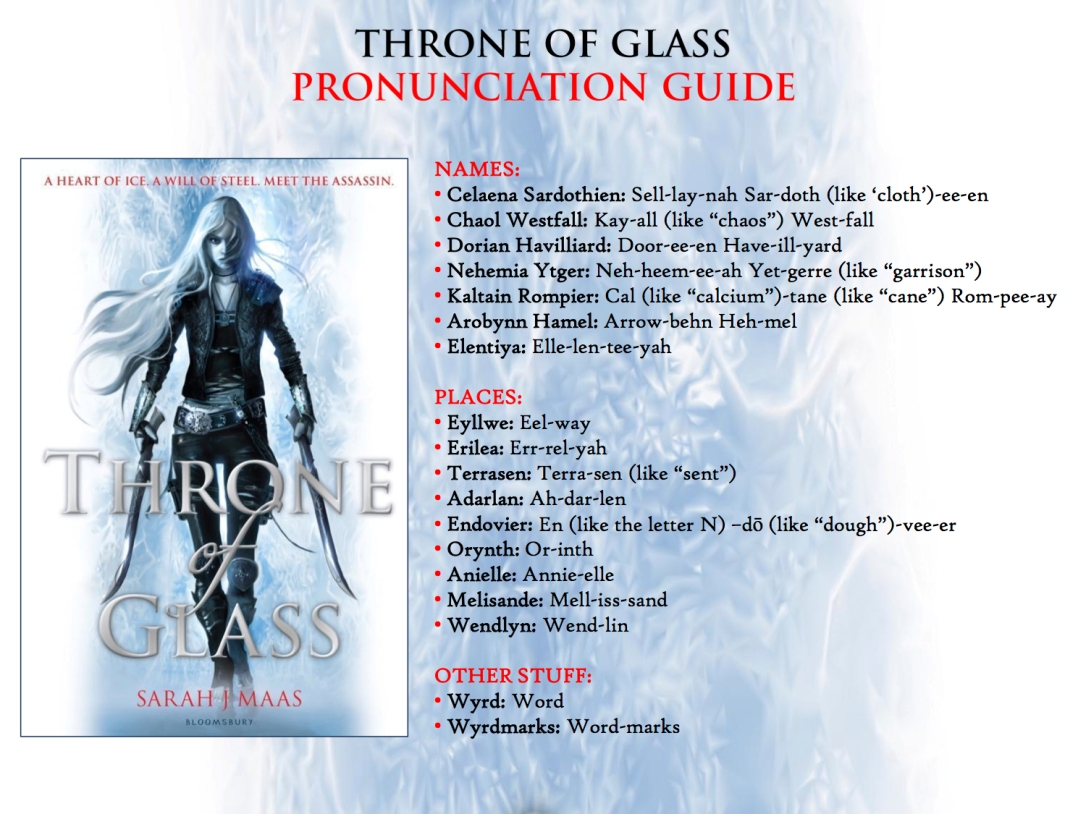 I was expecting the first book to be all about the contest, but what is first described as the main event of the story slowly gets overshadowed by greater more ominous problems. Other plots come and fill what would have become boring if only the competition had been taking place. It was nice to see Celaena getting to know all the contestants through the Tests without being entirely focused on it. I welcomed the magical mystery that came creeping into the story, although I wish there had been a little more explanation, some things felt a bit overwhelming as you get introduced to a well-built world with a very complex and ancient story. I felt the balance between each plot was just right in building enough tension to serve an eventful and intense ending.

Even though this review sounds as if I had a lot of things to complain about, I am glad Throne of Glass was my key back to fantasy. I had lots of fun reading Celaena being a fool teenager evolving in a ruthless world. I am not familiar with the rules and code of fantasy but I feel the story and characters check all the right items to be a good fantasy, and I will be looking forward to reading the rest of the series.

📬 BOOK MAIL 📚
NEW WEEK NEW READ 📚
🏹 Who could ever leave me, darling? But who could stay? 🍁
BOOK TOUR REVIEW 📚 Just Haven’t Met You Yet by @sophie_cousens
BOOK TOUR REVIEW 📚 The Dark Hours by Michael Connelly
🌻THE POSITIVITY WAVE🌻
Follow Meggy's Bookish Corner on WordPress.com